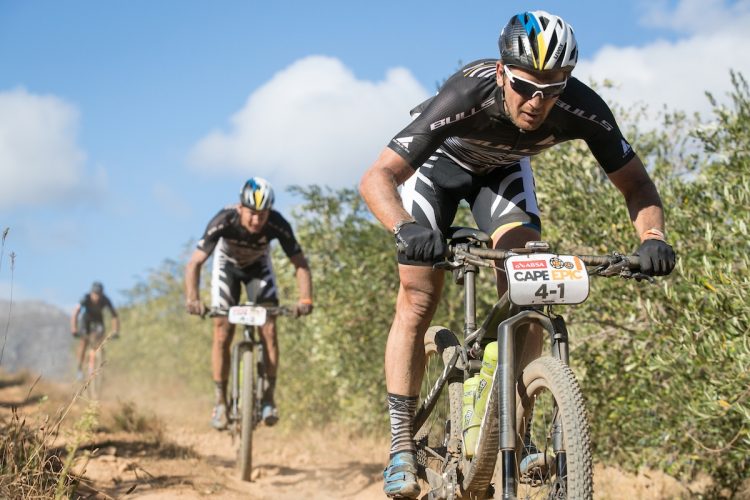 Germany’s Karl Platt has started every Absa Cape Epic since its inception in 2004 and won five times – a record of victories he shares with Swiss legend Christoph Sauser. Austrian powerhouse Alban Lakata has twice finished second – including in 2018 – and also bagged third, fourth, fifth and sixth over his 10 years of competing in the world’s premier mountain bike stage race.

Now the duo will set aside their decade of being rivals and the Austrian has joined Team Bulls to race as Platt’s teammate. Their ambition is to give Platt a record-setting sixth win and for Lakata to add the Absa Cape Epic title to his two marathon world championship trophies.

“I mean, Karl didn’t ask me just for fun,” laughs Lakata. “Obviously, our goal is to win the Absa Cape Epic, but we know that everything has to come together.”

Platt is renowned for his cool and calculated approach to the eight-day stage race, whereas Lakata is an extremely strong rider given to attacking at every opportunity.

The combination should be a powerful one and Lakata believes they will work together well, pointing to their collective experience as an important factor: “Everybody knows how important mental strength is in a stage race.”

He is fired up by joining Team Bulls and riding a new bike this year: “It’s a big motivation. Changes like new equipment, new teammates and support can give you an extra boost. Specially for an older – or let’s say more experienced – guy like me,” he laughs.

Team Bulls will this year also have a second team that has the potential to reach the top step of the podium and a third riding as support (to hand over, say, wheels if one of the leaders gets a puncture). Former winner Urs Huber of Switzerland – he won with Platt in 2016 – will be teaming up with the talented Simon Stiebjahn, who has finished third in the Absa Cape Epic.

The support team will be Martin Frey and Simon Schneller, both from Germany. Steibjahn has ridden support for Platt and Huber for several years but will be hoping for at least a top three finish this year. Stiebjahn is renowned for his technical riding abilities and Huber is extremely powerful over marathon distances.

“It would be wrong to come to the Epic with such a strong team – not only us riders but also the staff that work backstage – and not believe we can win the race,” says Stiebjahn. “But we also know from our experience over the last years that a lot can happen during the eight days. So our goal is to fight for stage wins and at least stand on the podium in GC. For more, we also need that extra bit of luck.”“I’m happy to have such a strong rider on my side,” says Stiebjahn of Huber. “We raced for the very first time as a team together at this years TransAlp and it worked out perfectly. Winning five out of seven stages and finishing second overall was a good first race.”

Both Lakata and Stiebjahn said their training was going well and they were aiming to arrive at the Absa Cape Epic start line in March in peak form.Stiebjahn is enthusiastic about the 2019 route: “Like always the route looks hard because you have long stages with a lot of climbing and some short stages including a lot of technical singletrack. So yes, it will suit our riding styles, because we both like these combinations.”

Lakata adds that “the route is similar as last year. In terms of profile and distance of the stages … and that will also suit us”.

Team Bulls have made it clear – they are arriving at the 2019 Absa Cape Epic with serious intent.