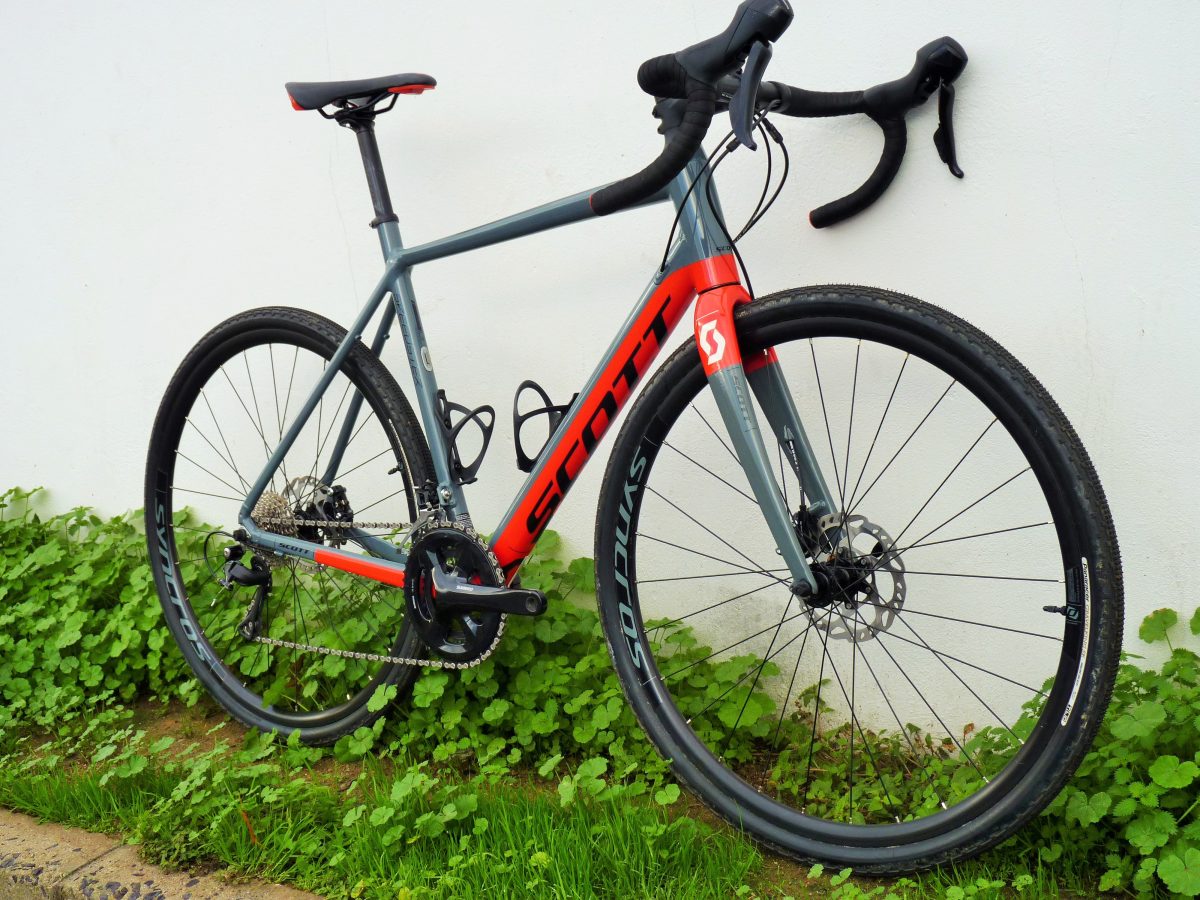 The 2018 SCOTT Speedster Gravel 10 Disc bike was built to pioneer uncharted dirt paths, and tame rough roads. The bike is uniquely versatile, being able to cruise off-road or on the tar.

My immediate responsive to the 2018 Speedster Gravel 10, was noting that it looked purely amazing. That organic orange, on the downtube, was certainly not an eye sore. SCOTT didn’t design this bike to only represent looking good on gravel roads, however. I found it to also be just as capable on long road rides, as it was on the trail. 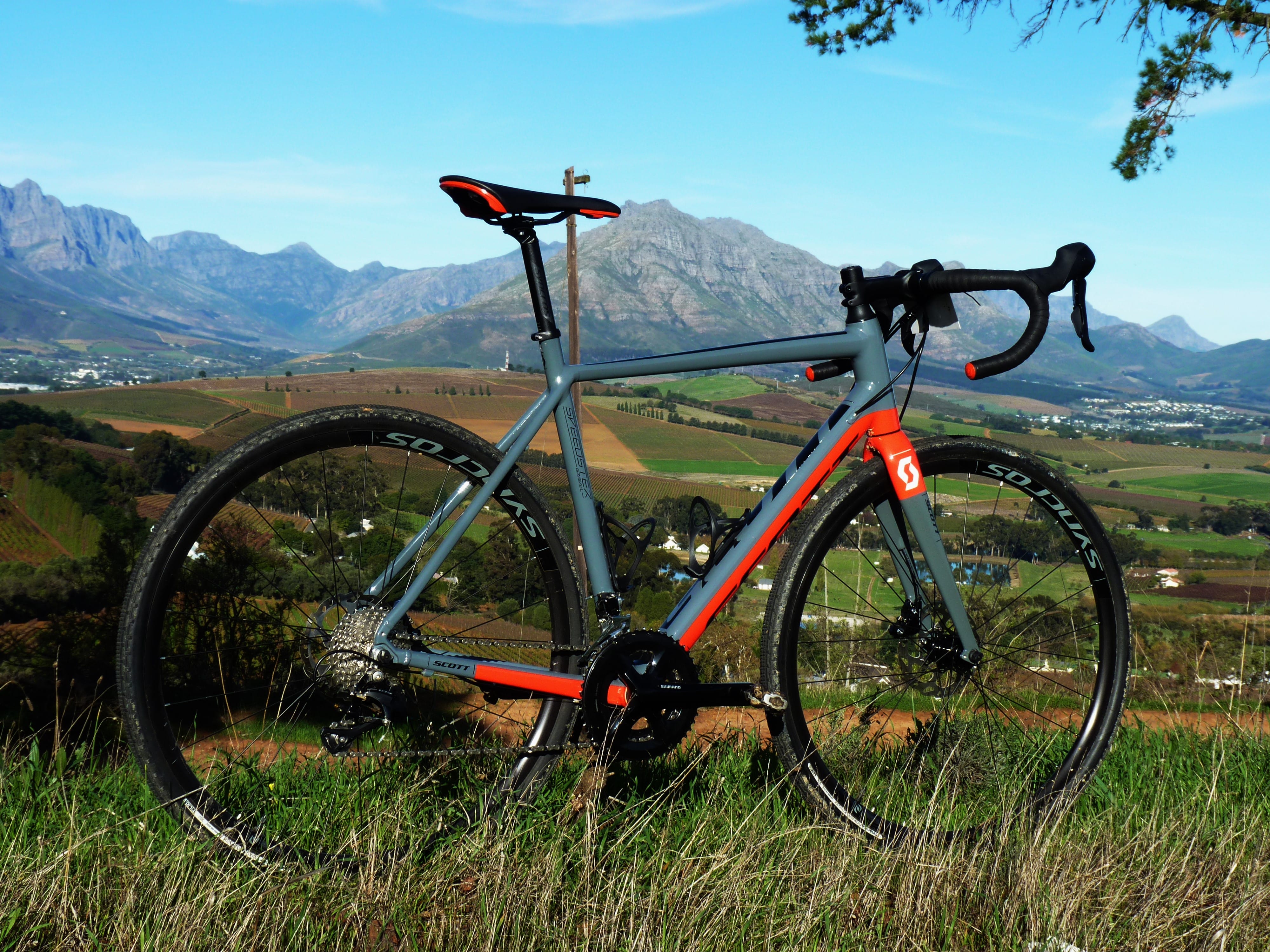 The Speedster Gravel 10 Disc frame was made with SCOTT’S D.Butted 6061 Alloy. Despite being alloy by nature, I hardly felt the alloy take its toll. This was probably due to the fact that SCOTT’s engineers stretched the metal in such a way, that the frame remains reinforced in certain areas. While featuring thinned out tubes, to save weight. 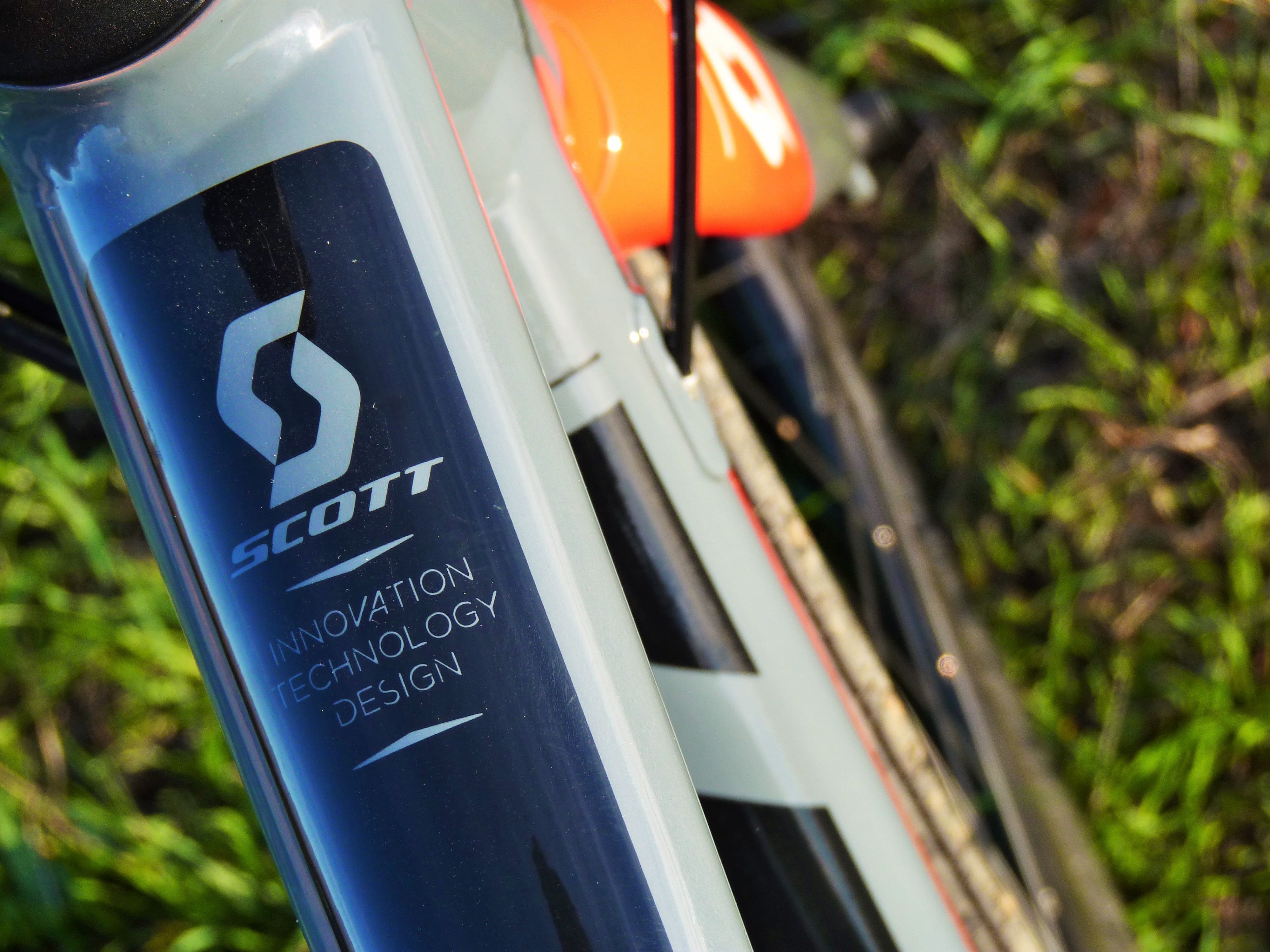 The SCOTT Speedster also had had hydraulic disc brake mounts integrated on the frame and fork. The position of each mount, aimed to not compromise lateral stiffness of the frame itself, when applying brake pressure.

The fork on this bike, was constructed from carbon fibre. If you have any experience with SCOTT’s carbon, then you’ll know its exemplary. Sure, there was minimal compliance coming from the fork, but all that stiffness showed its strength on the drawn-out road ride. 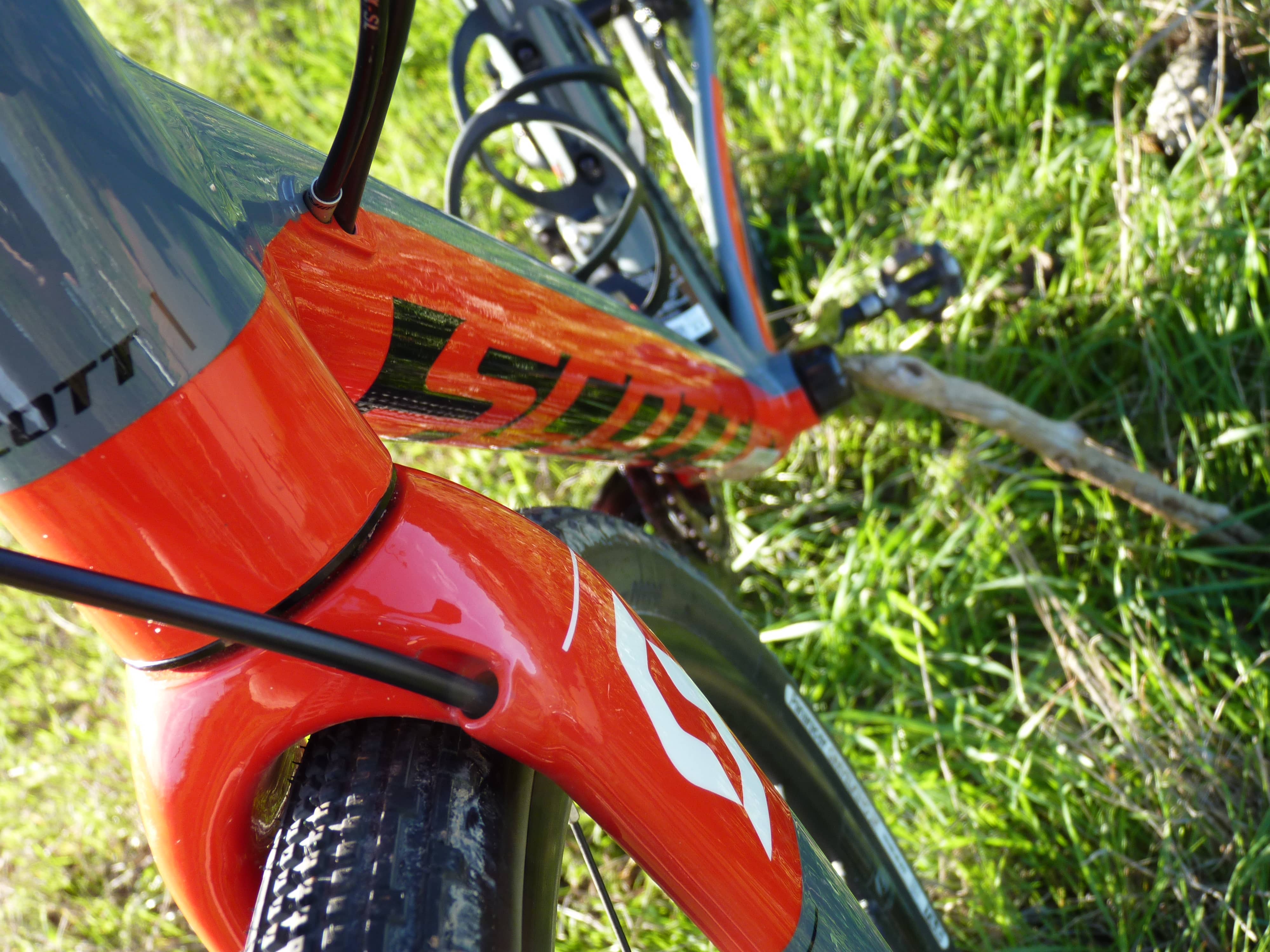 The gravel bike definitely had a drivetrain worth boasting about. Especially considering that the bike was not a high-end model. On my test rig, Shimano’s 105 gear-set kept the cranks turning and integrated the hydraulic disc brakes. It had a distinctive 2×11 speed set-up, with 50T and 34T chain rings up front. The chain ran along a well thought-out 11-32T cassette, which supply enough gears to get up steep hills. 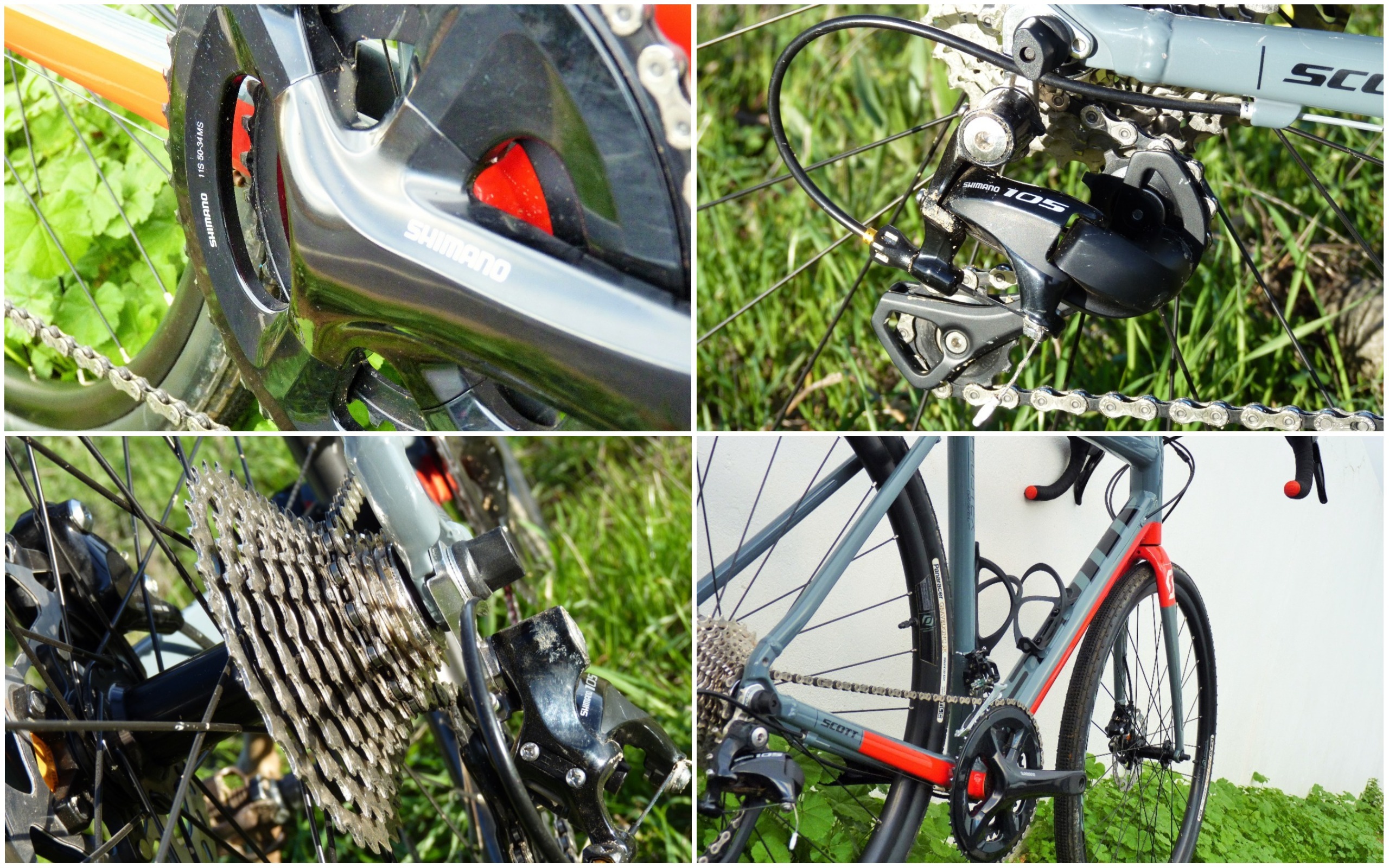 The wheels that SCOTT equipped the Speedster Gravel 10 with, shouted all-terrain. For both the front and rear wheels, I had a Syncros Race 24 Disc rim with a reassuring rim width. The rims were each laced to Formula Team CL Disc 28 hubs. Overall providing balance and superb wheel stiffness. On my test bike, for tyres, I had Panaracer’s Gravel King SK rocking a size of 700x38C, which proved to be relatively cushy over harsh terrain. The standard tyre that SCOTT equips this bike with, however, is Schwalbe’s G-one Allround series. 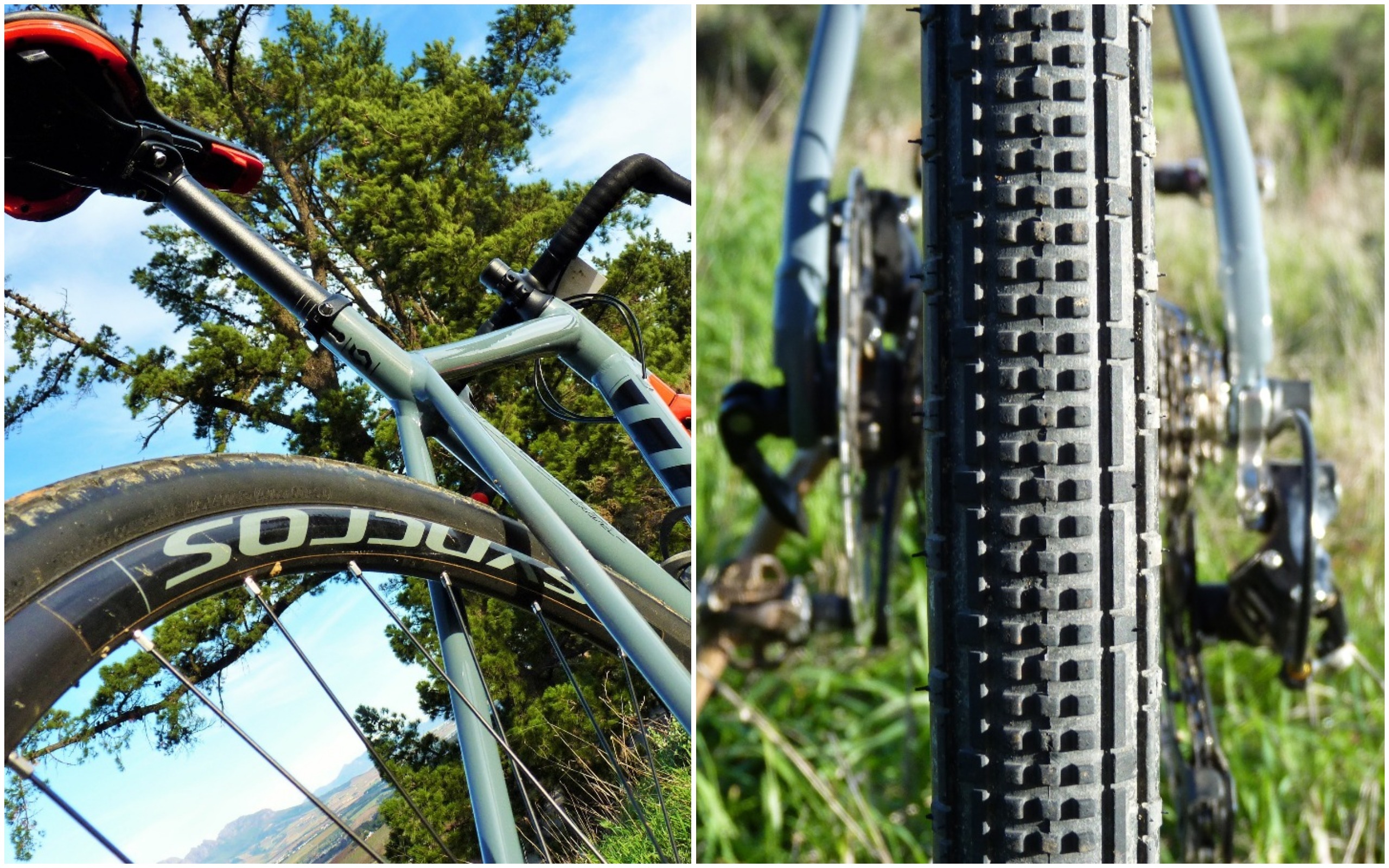 While piloting the Speedster Gravel 10, I rode a large frame. Now the geometry obviously differs from frame size to frame size. So for this particular bike, it had 73-degree head tube angle, and seat tube angle of 73.5. The similarity in angles of the seat and head tube, increased the frames stiffness, and secure a contented riding position. For when off-road obstacles arose, I had a 282mm BB height, which cleared pretty much anything. 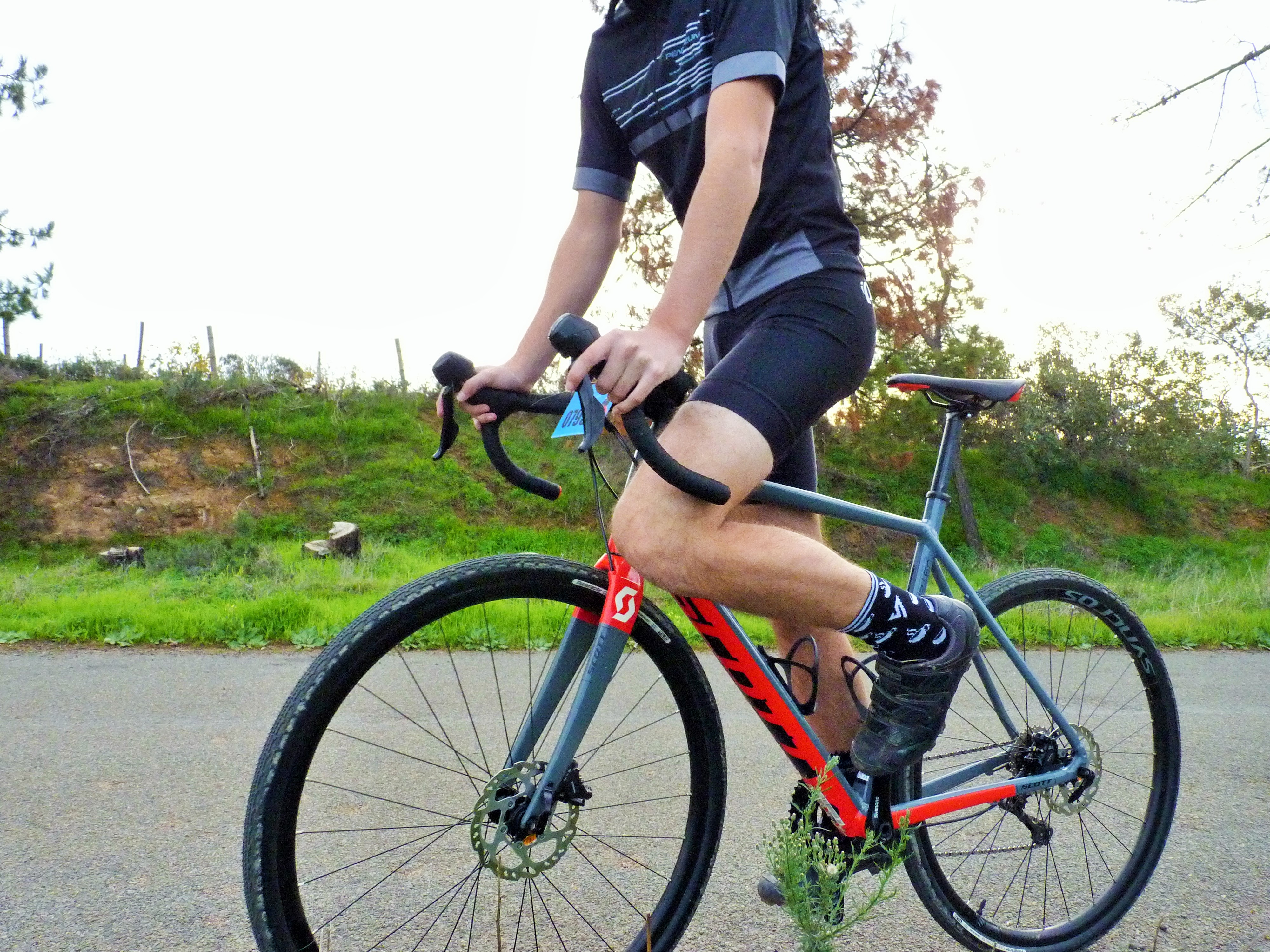 The SCOTT Speedster Gravel 10 performed naturally like a road. However, the cockpit area featured gravel type dropper bars – a first of its kind. The Syncros Creston 2.0 Flare bars provided an extra comfortable hand rest, as well as good steering. The stem in itself was a happy medium between short and long, which helped me shift my weight over the front wheel more, and have better control.

The rugged 700x35C tyres spat out solid grip on both gravel and tar. Whilst climbing on the road however, the tyre did feel slightly more rubberized than usual. But when I hit the dirt, that extra bit of rubber came in handy. Over rocks or roots, despite having no shock absorber, the thickness of the tyres aimed to make the ride smoother. This gave me as the rider more confidence, even on descending. 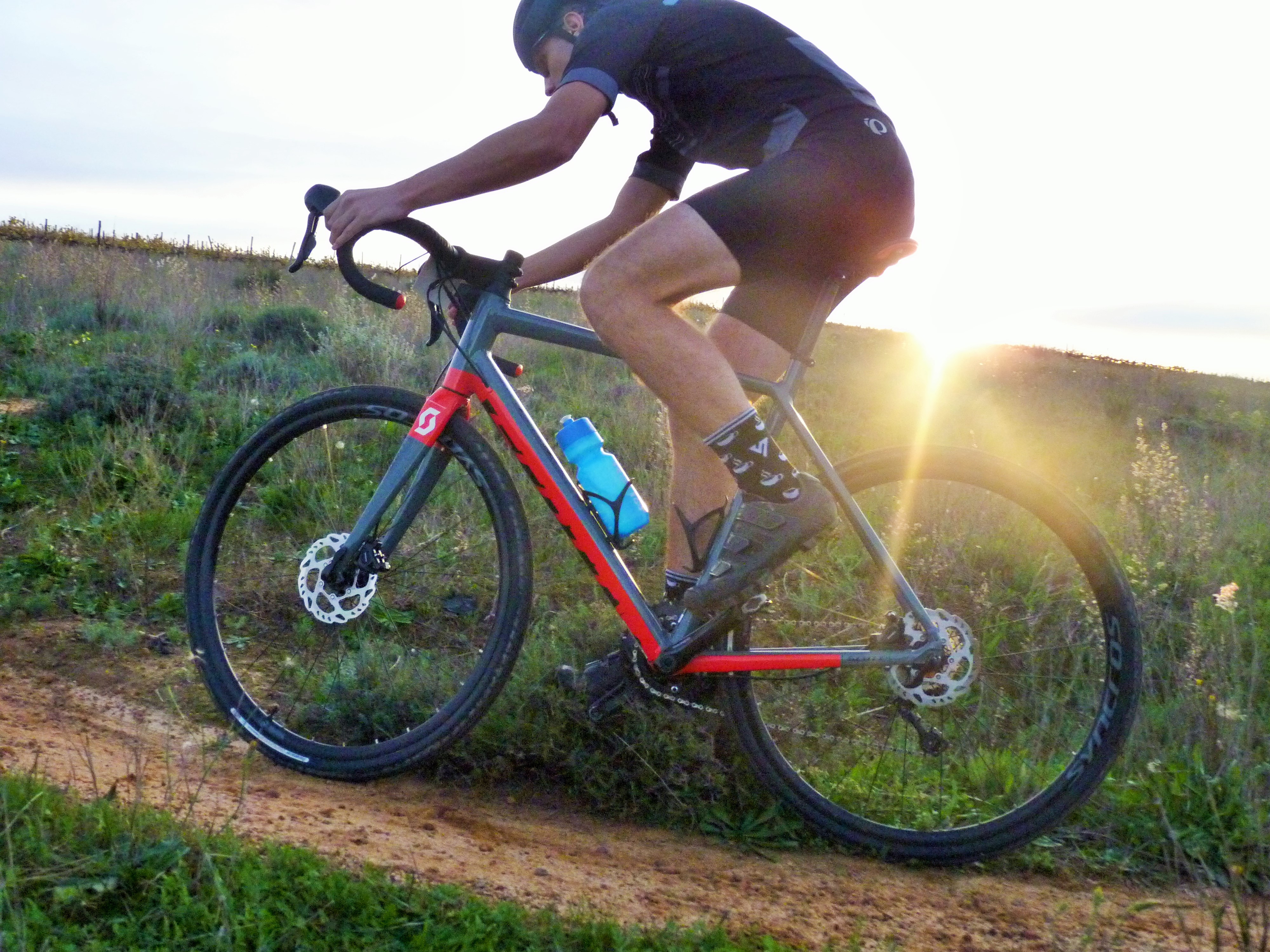 The endurance factor of the SCOTT Speedster Gravel 10, was what sold me on this bike. Apart from being a multi-road grinder, components such as the saddle, gears, q-factor and brakes, made the bike ideal for triple digit road riding. On flat-out open road, I felt very much in control of this bike. While the saddle kept bum-soreness away, and the q-factor of the peddles meant I could settle into a decent paced rhythm.

I thought the hydraulic disc brakes were also a nice feature added by SCOTT. They helped alleviate strain on my hands, when braking, and were just more effective at stopping. It also provided dead-stopping power on technical dirt sections. Thus, I’d say the brakes saved energy in the long run. 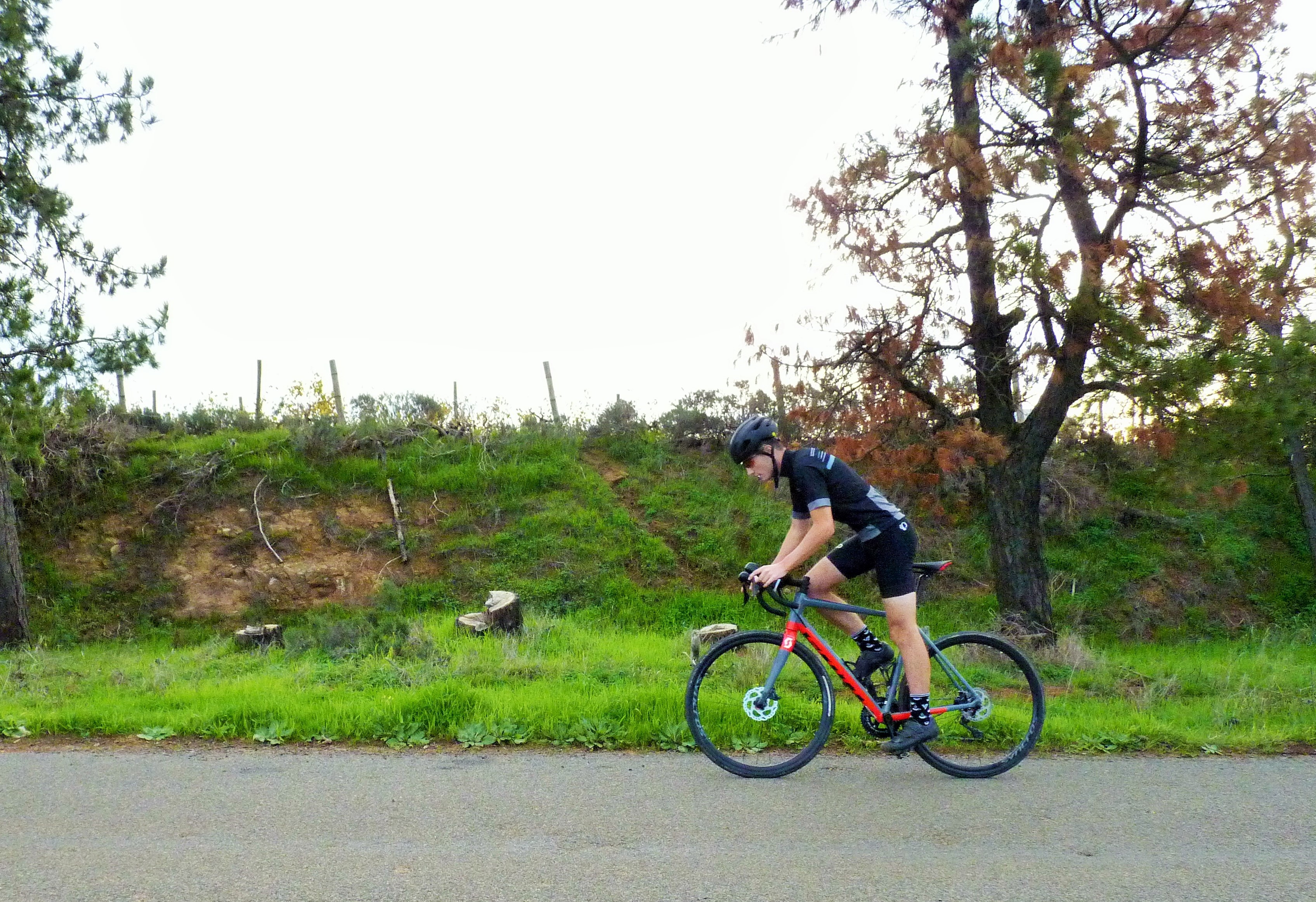 There are a few adjustments I’d make to the Speedster Gravel 10, if I were SCOTT. Firstly, they could increase the level of aerodynamics on the downtube of the frame. I reckon this will even come in handy on the gravel. Secondly, they should also consider adding some shock absorber of sorts. Especially since this model is not mad from carbon, and therefore, the frame compliance is not that great. 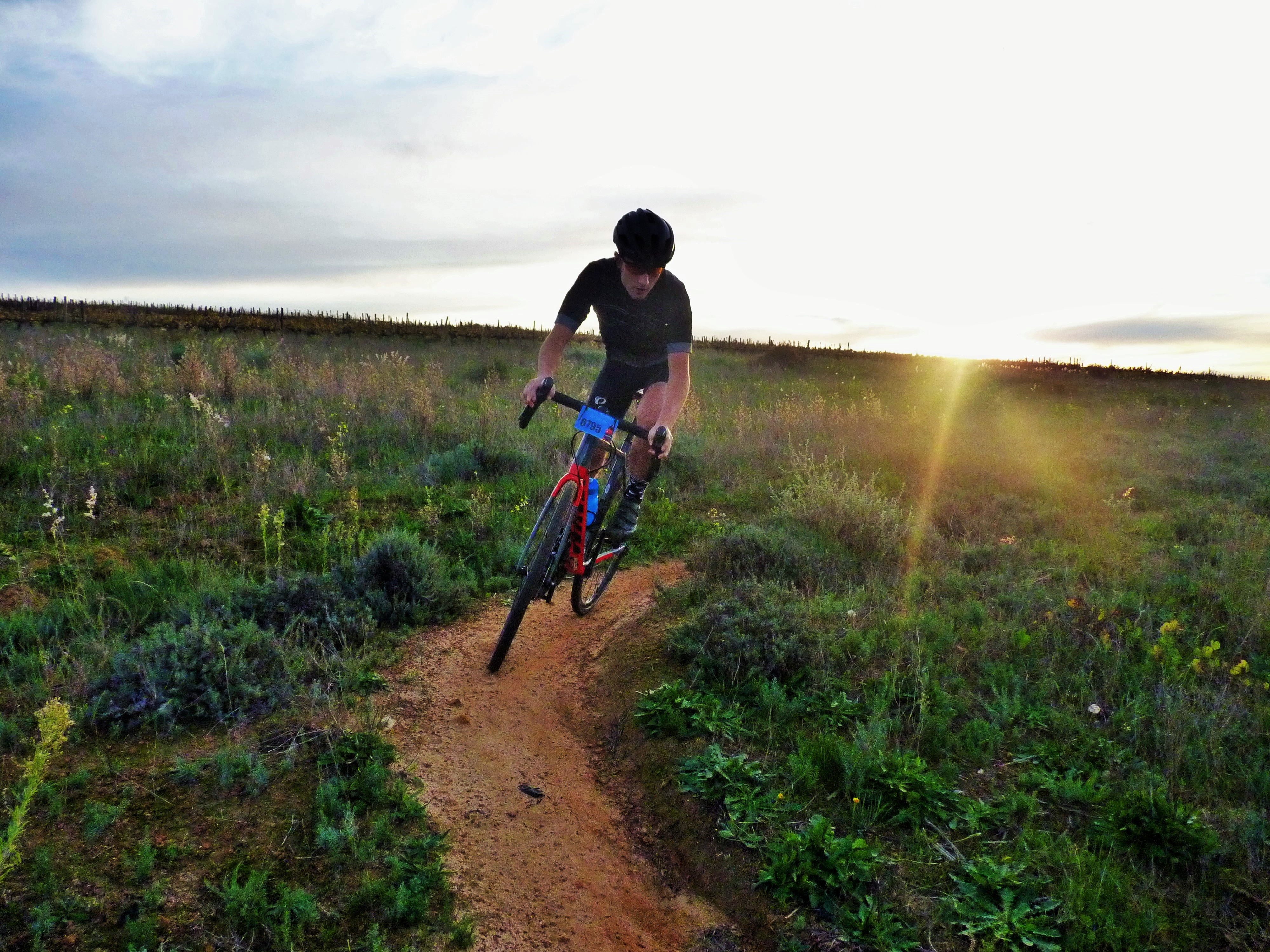 For the bike’s price range, however, SCOTT have done well! The level of spec on the Speedster Gravel 10, and comfort features, quite out weight the all the cons that I might find. I personally found it fast and rider efficient, and that’s all that you really need.

The LEGENDS at Flandria Cycles have a massive special on this bike! Get in-touch with Leonardo (+27 21 887 1533) to organise yours!