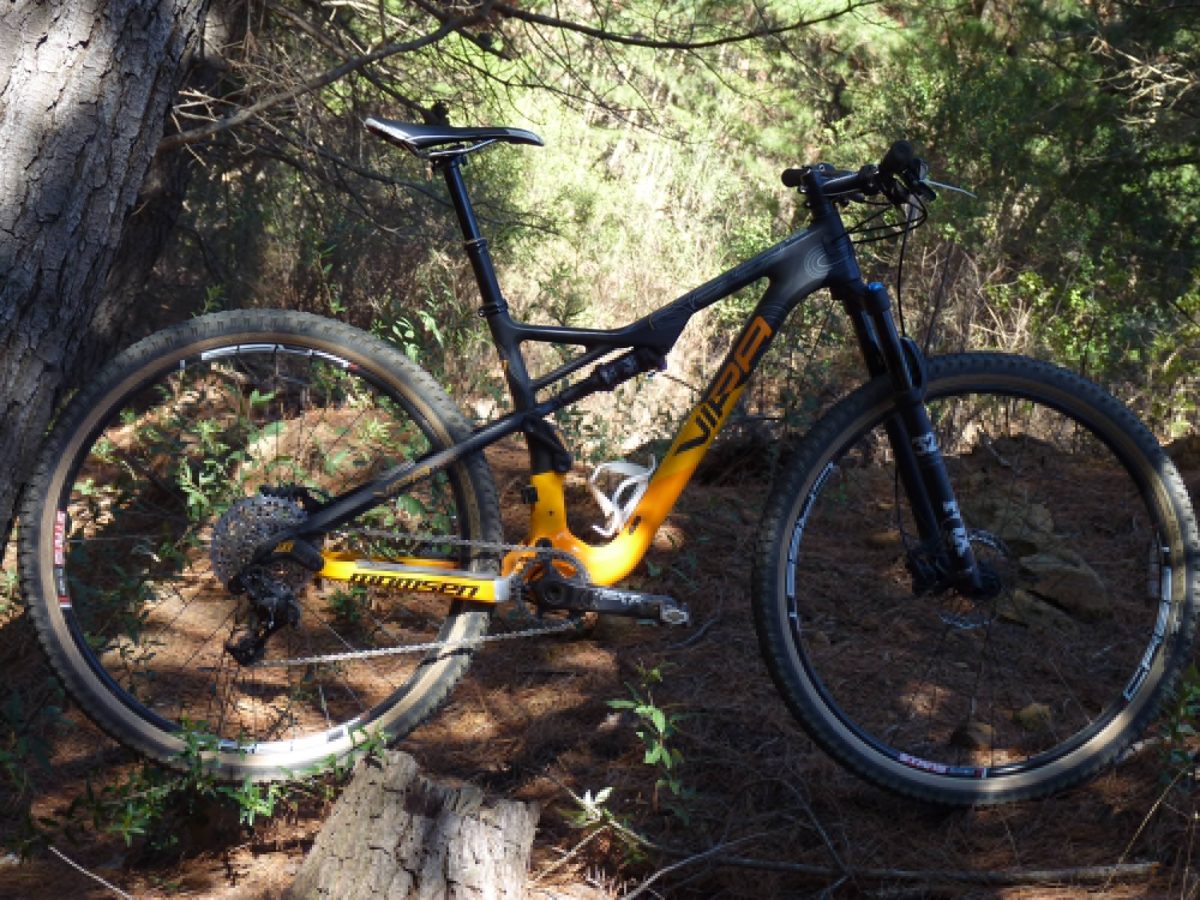 The 2018 Momsen VIPA Trail is one sick, trail-crusader! Shattering expectations and turning the heads of anyone who locked eyes with this compelling trail weapon!

Our test bike, was the 2018 VIPA Trail One, that had been customized down to the T! While I was tempted to start this review with:

My co-riders advised me that it would create too much of a biased outlook. However, I absolutely couldn’t deny the vicious appearance of the VIPA Trail, and the very fact that this trail bike lacked no speed, whatsoever! 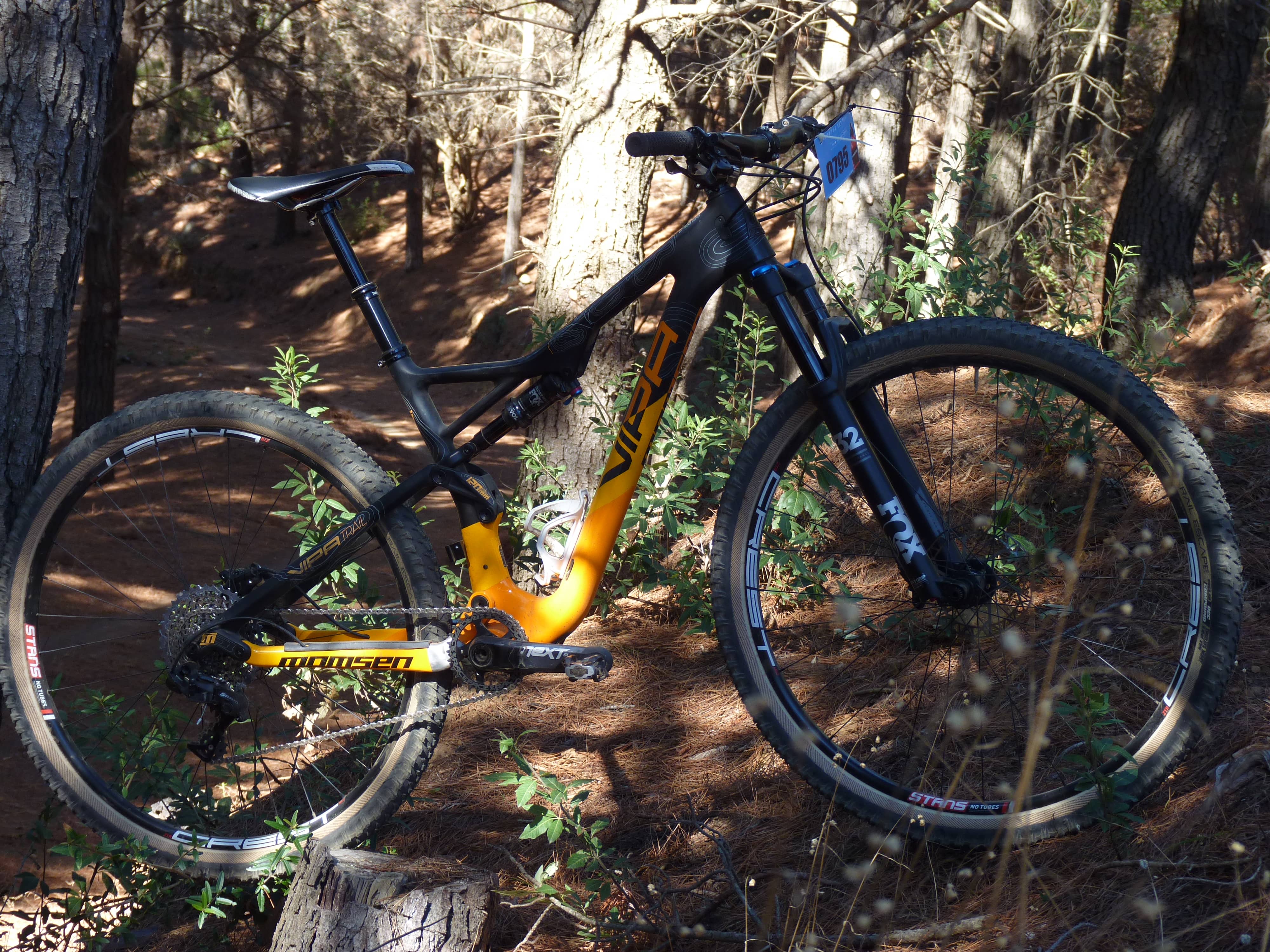 As if the VIPA Trail’s creative frame decals and colour scheme, weren’t enough to insight envy. The technology and features that were integrated into the frame, certainly was! For instance; everybody wants a light-weight trail bike that they can charge down and around single-track with. With the full carbon fibre frame of the VIPA Trail One, you’ll be able to do just that. 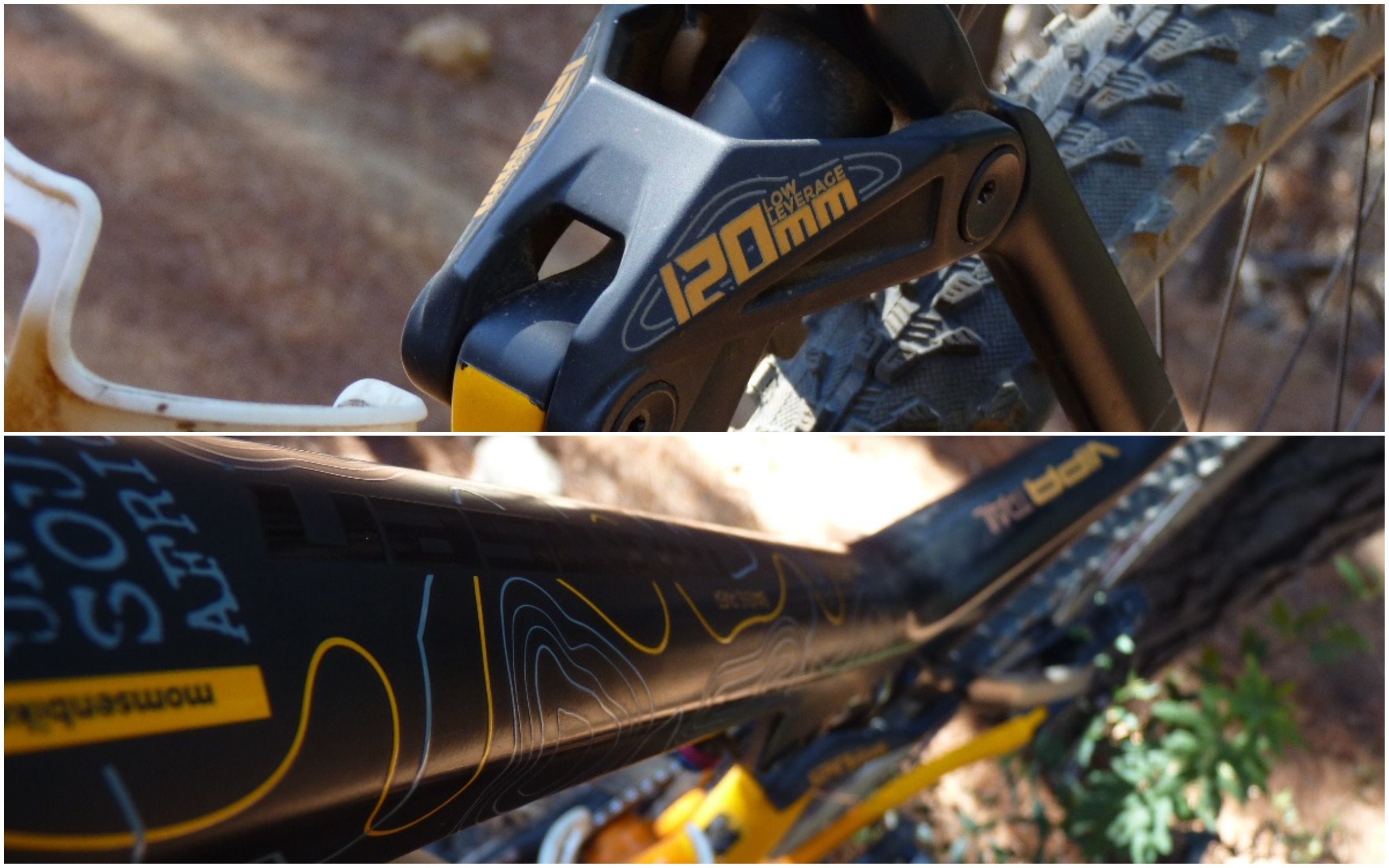 That’s not all. The bike packs along 120mm of rear suspension travel, along with a Lower Leverage Suspension rocker-arm. In my experience with the VIPA Trail, it constantly felt that the low leverage of the rocker-arm, magnified the feel of the 120mm rear shock. I’m not too sure of the whole science behind this, but I am sure that it produced a more active rear suspension.

The spiffy, custom added, white-wall tyres and rims don’t just keep you rubber side down. In-fact the fresh white-wall tyres drew the eyes (and hearts) of pretty much every rider we met on the trail. However, it was no joke at all when these wheels started crunching dirt. 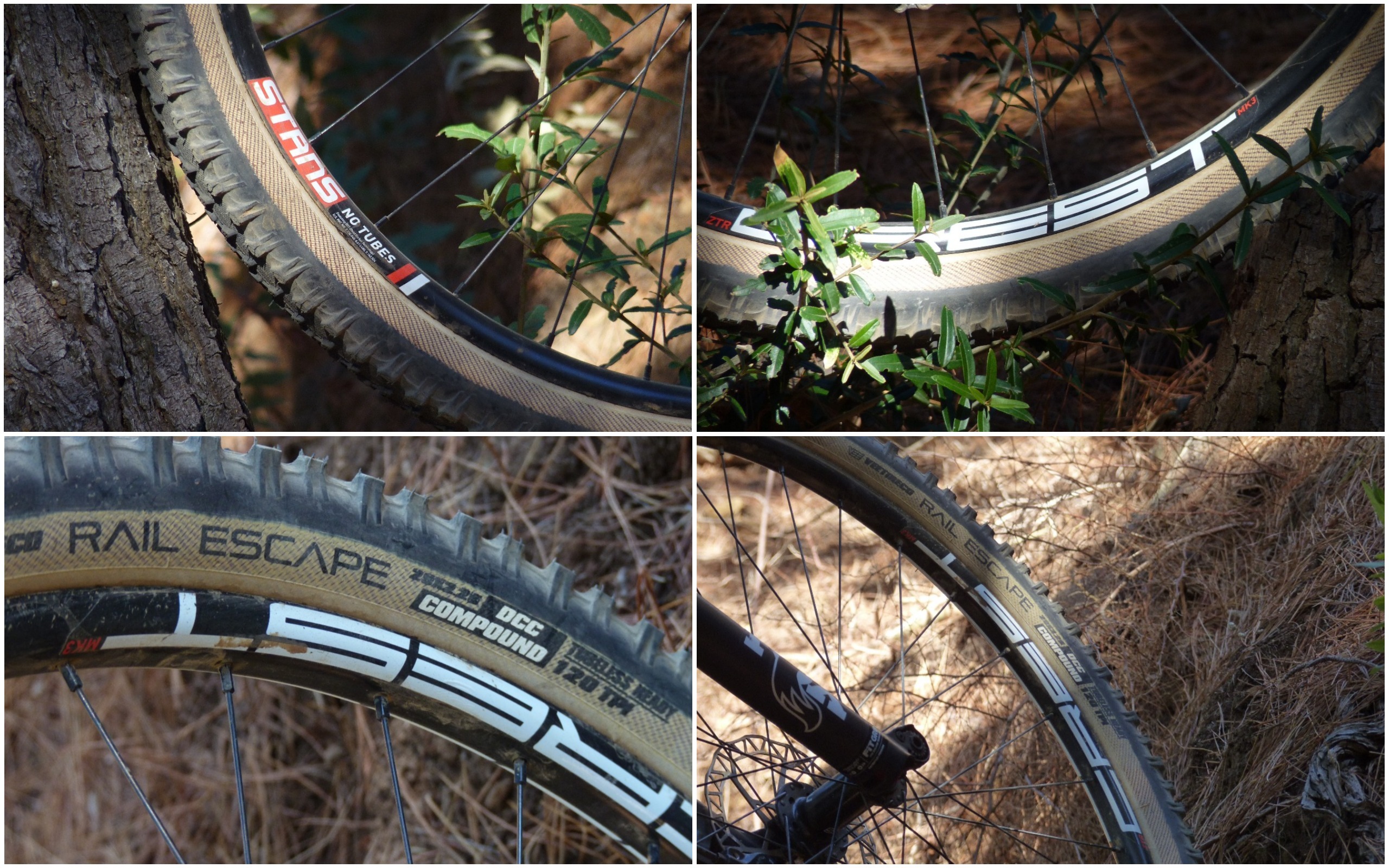 Stan’s No-Tubes ZTR Crest MK3 wheel-set matched up with the tyres, to provide reliable strength and stiffness when it mattered most. They had a 23mm internal rim depth. Which was only sensible, since with trail ventures you’re going to want a more stable than fast rim. The VEET TYRE CO Rail Escape, white-wall tyres, complimented the wheels well. With a 29×2.25 tyre size set-up and a Dual Control Compound for grip; these wheels were able to match anything rocky or sandy.

While the 2018 Momsen VIPA Trail One does not come standard with these components, it’s a good example of how you can customize your VIPA Trail! 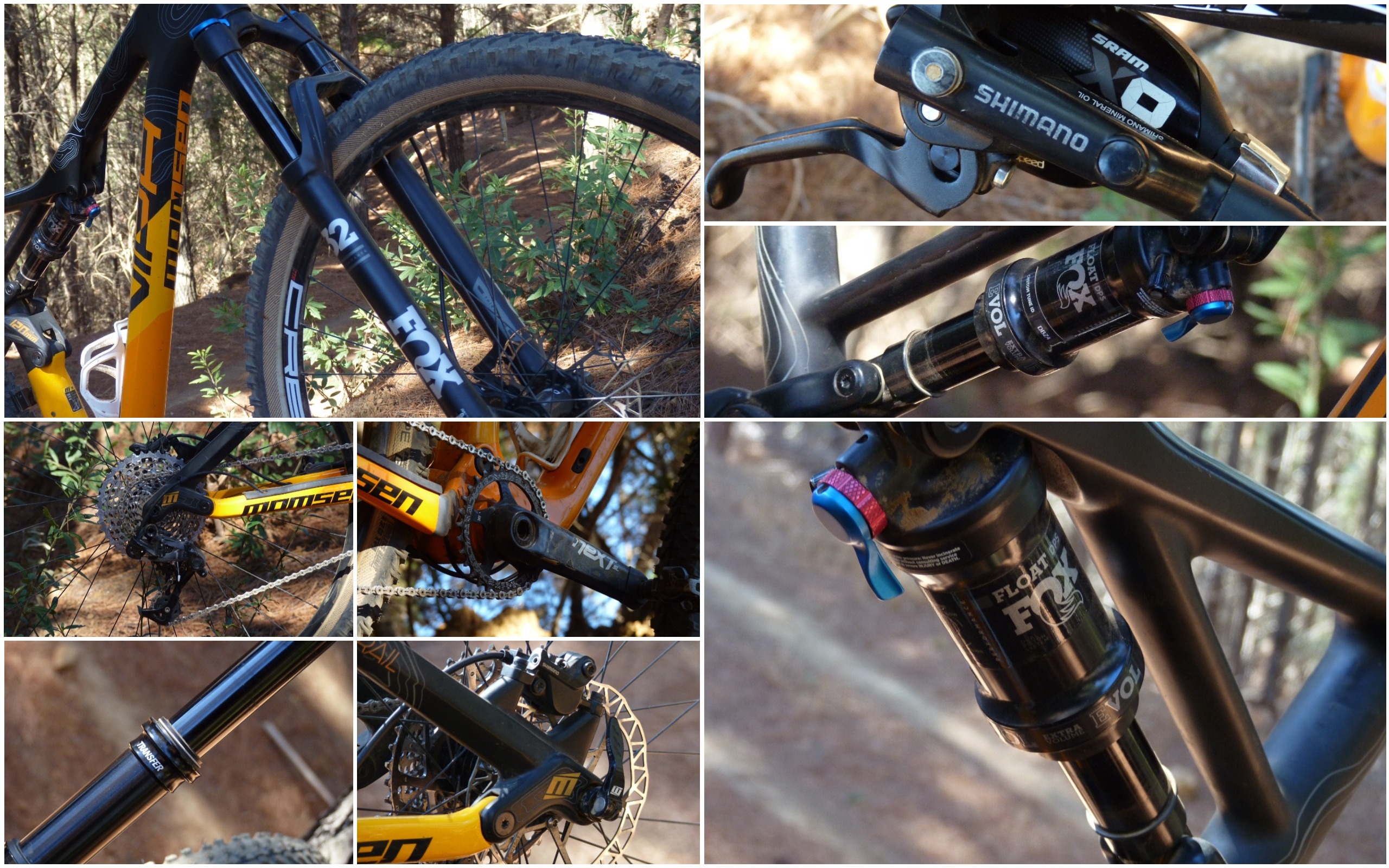 The frame of the VIPA Trail was strategically designed to be trail orientated. Thus some of the angle measures are similar to those that you’d find on a trail bike, but in the same breath, is blended with a XC bike’s maneuverability character. The 67.8-degree head tube angle was dreamily slack. As was the 73.5-degree seat tube angle. The somewhat shorter chain-stay, provided good general balance over the back wheel. Which made the bike nicer to tail-whip every now and then.

My overall first impressions on how the 2018 Momsen VIPA Trail rode, were super positive. The rather unique geometry, reserves a more relaxed ride position. Then there was the 120mm rear travel suspension coming from the FOX Float DPS Performance shock, that strived to make the ride as buttery smooth as possible. While the FOX TRANSFER dropper seat-post is not standard on the VIPA Trail One models, it was a well-appreciated addition to the custom bike. Through aiding the way, you descend. 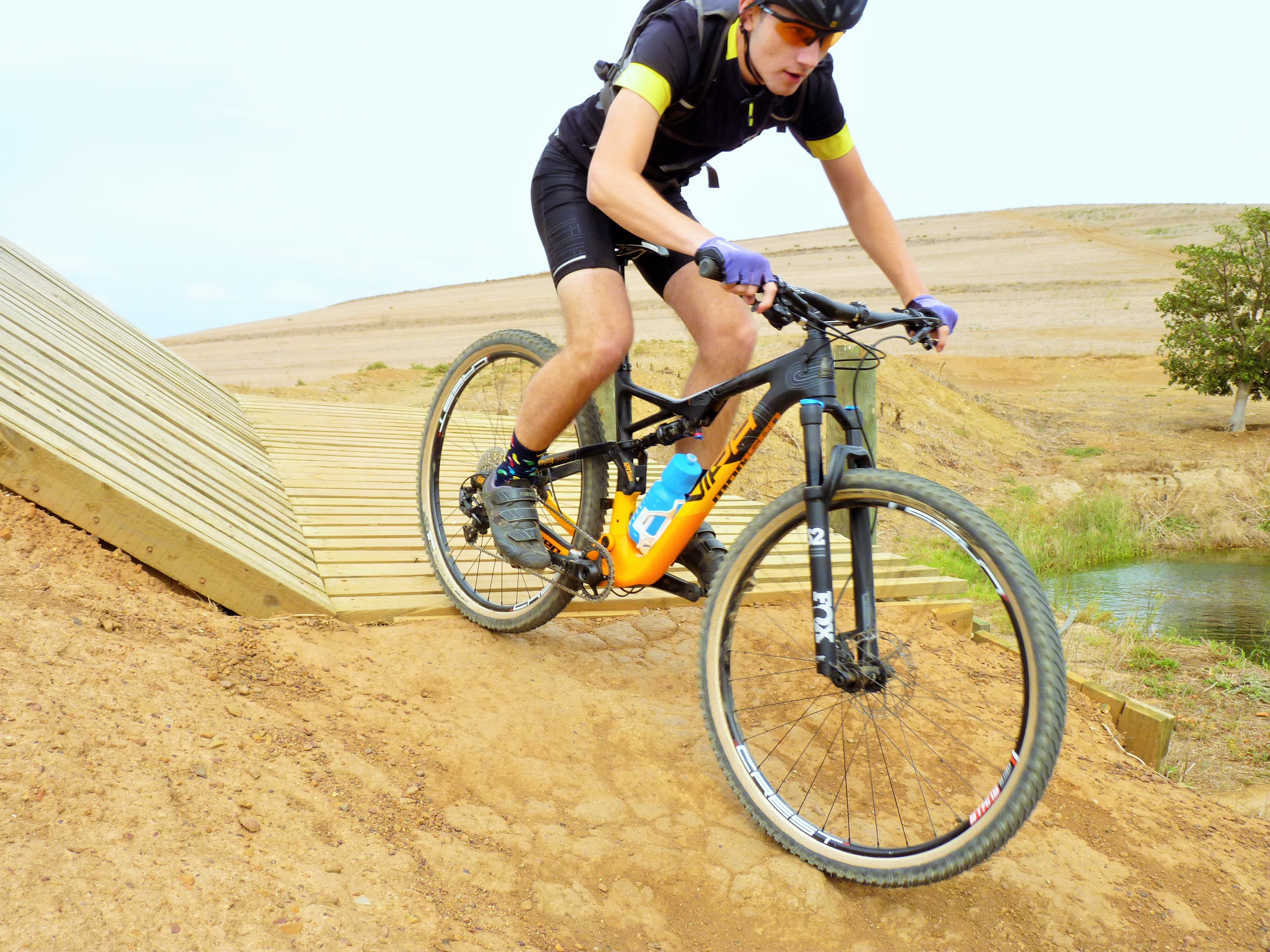 Okay, so on climbs, the VIPA Trail was surely not the fastest. However, the seat-angle and q-factor of the frame, made pushing harder on your pedal stroke more comfortable. I had a 30T chain-ring on this VIPA Trail One build and could definitely rely on it to make climbs easier. Also, the bike had an easier gear ratio overall. Which meant I could save my energy and have more fun on the downhill. 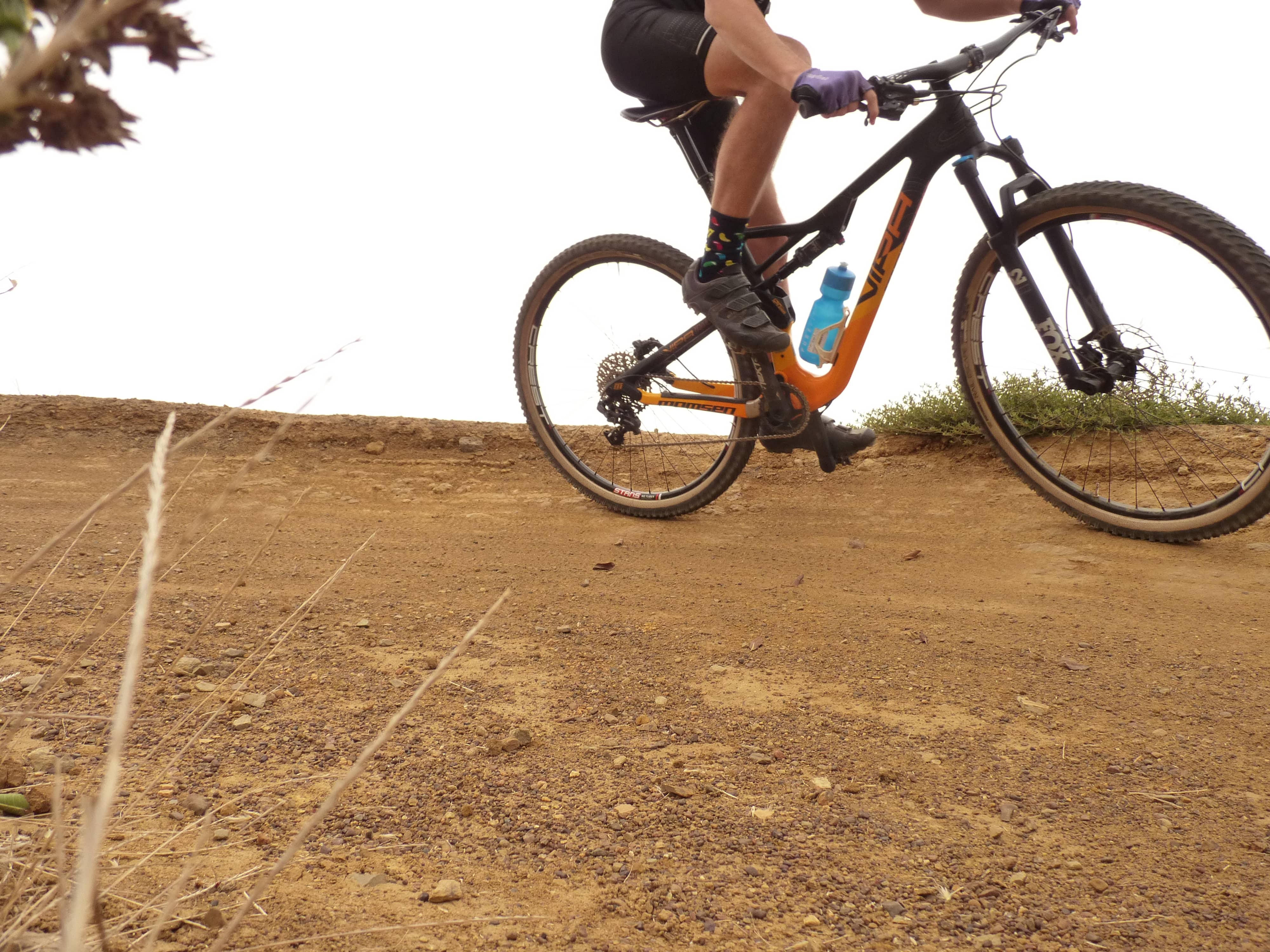 Speaking of downhill! When I locked and loaded the VIPA Trail into the fastest gear for the descend, the bike was superbly reliable. It had the tendency to flow naturally over obstacles. Therefore, increasing the speed at which it rolled. I was deeply enthralled with the VIPA Trail’s aggressive attitude towards descending, and it inspired confidence in me. 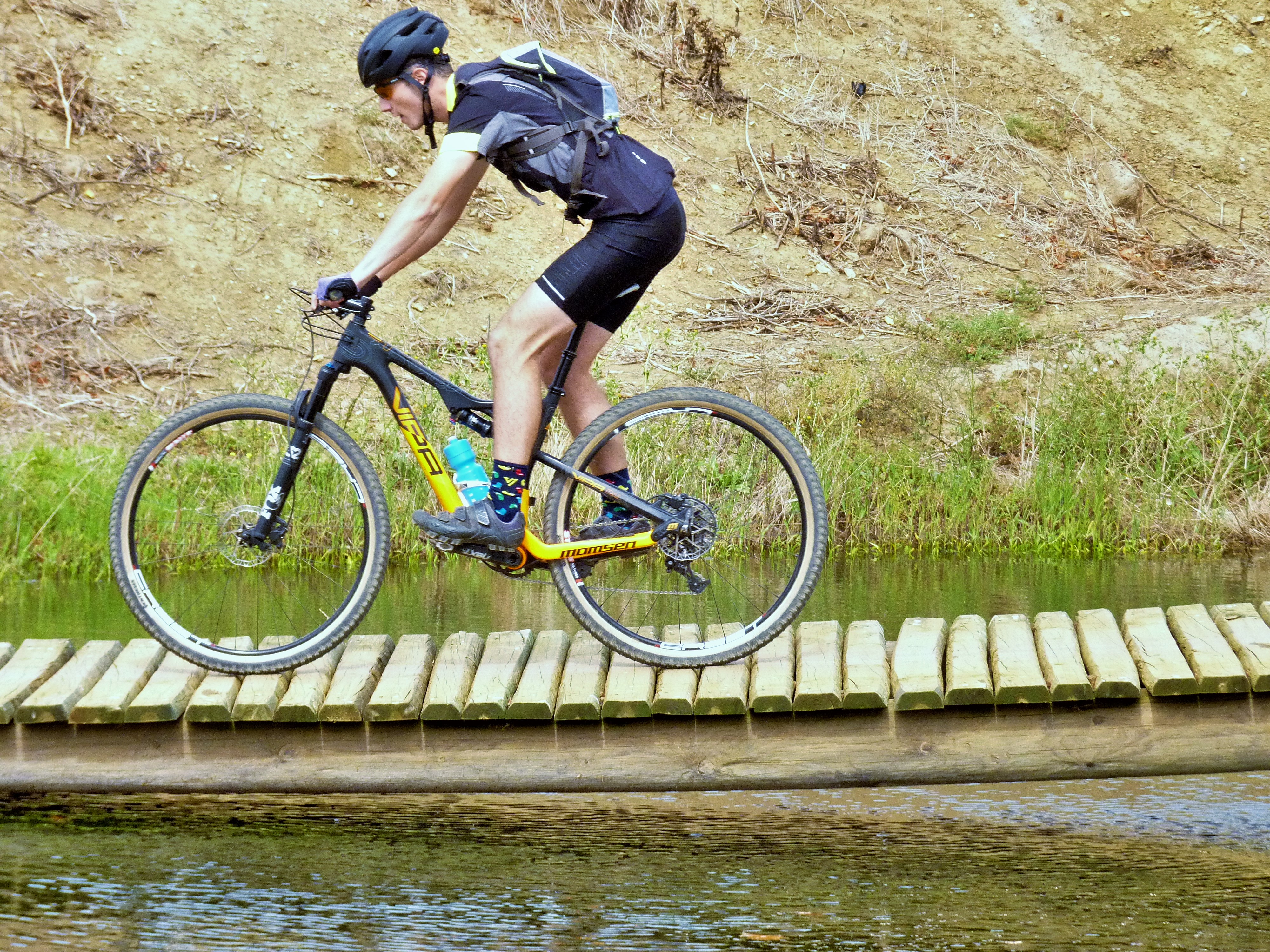 Now this is where I believe you’ll be envied the most; single-track! When you come carving down that perfect line, with that joyous smirk on your face, on a bike that never lets the action stop. The 2018 Momsen VIPA Trail was at one with the single-track, and when I nailed those berms, I only felt the adrenalin racing. Together, with the grip and stability provided by the wheels, and plushness of the FOX Float 120mm rear shock, the bike taunted me with speed. Seriously this bike is as fun as much as it is fast! 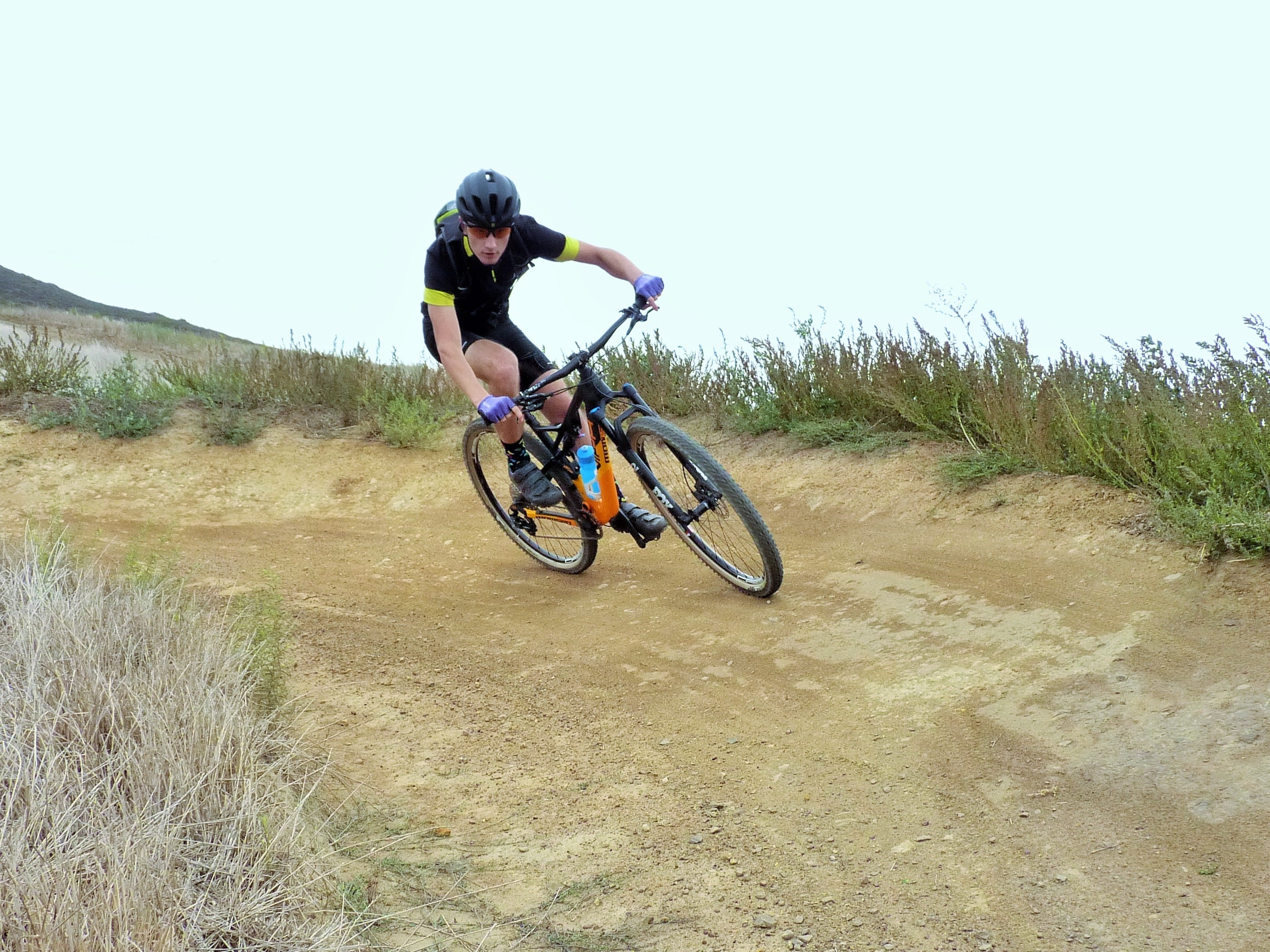 Riding shot-gun on the fork, was FOX’s 32 Performance shock with 120mm travel and an EVOL Air Sleeve. Naturally, this fork was charismatically forgiving. While it was part of the custom build on my test bike VIPA Trail, it handled technical stuff like a boss. Not to mention a spot-light stealer when soaking up drops, or jumps!

Created by the proudly South African brand, Momsen, the VIPA Trail has instinctively found a home on local trails. It leads the chase in ride vibes, to creating the next generation in trail mountain bikes. While I was intrigued by the bike’s design and frame artwork (and who wouldn’t be?), the VIPA Trail never let down my expectations. It’s a bike that will keep you coming back for more, and everyone around you, green with envy! 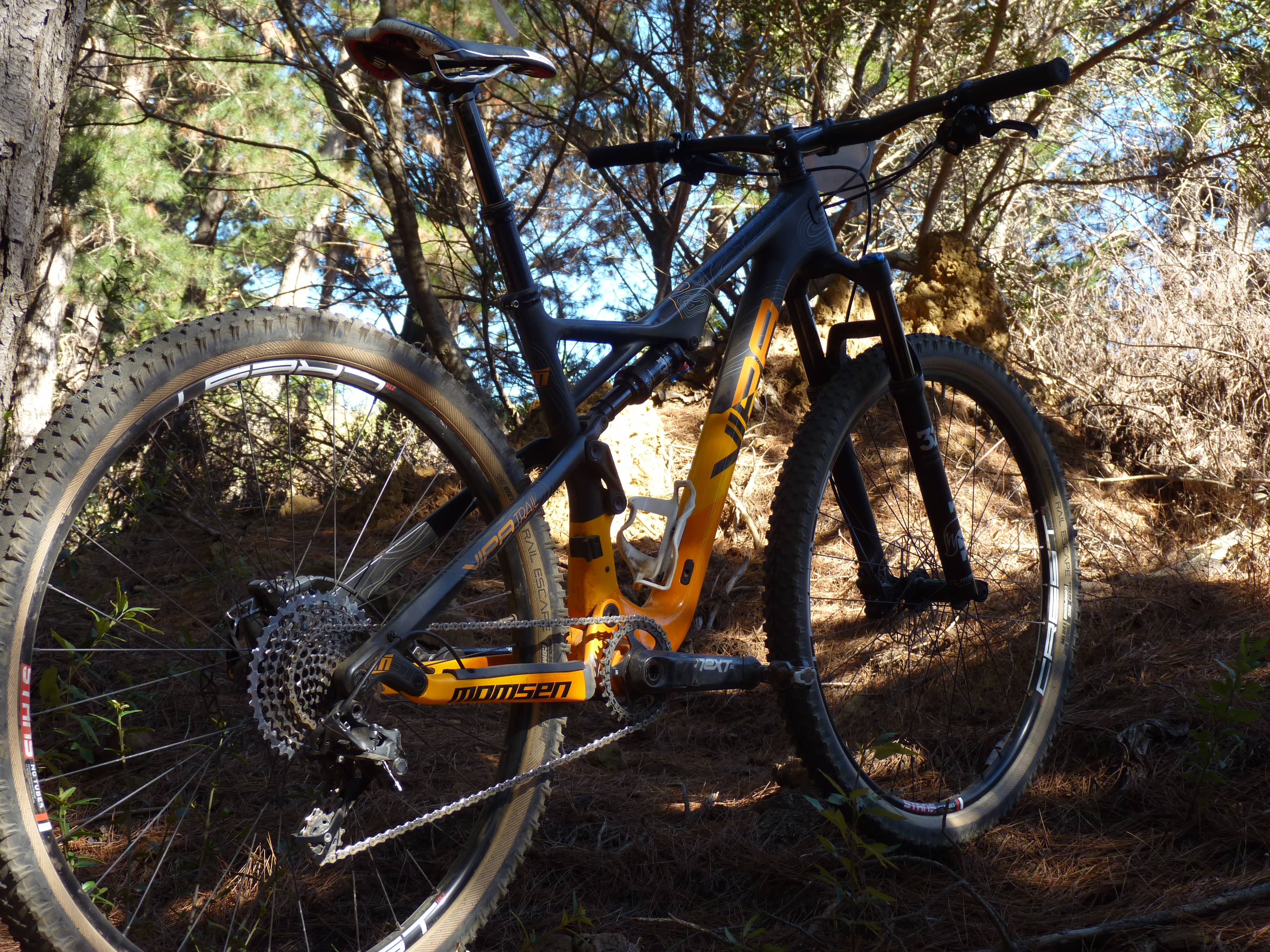