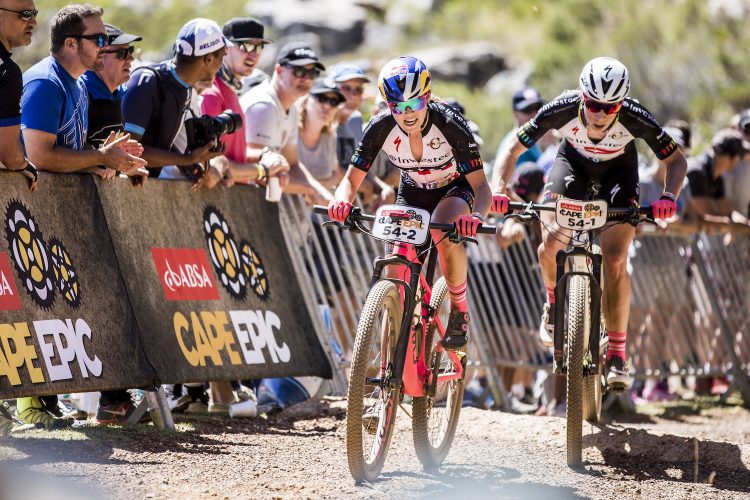 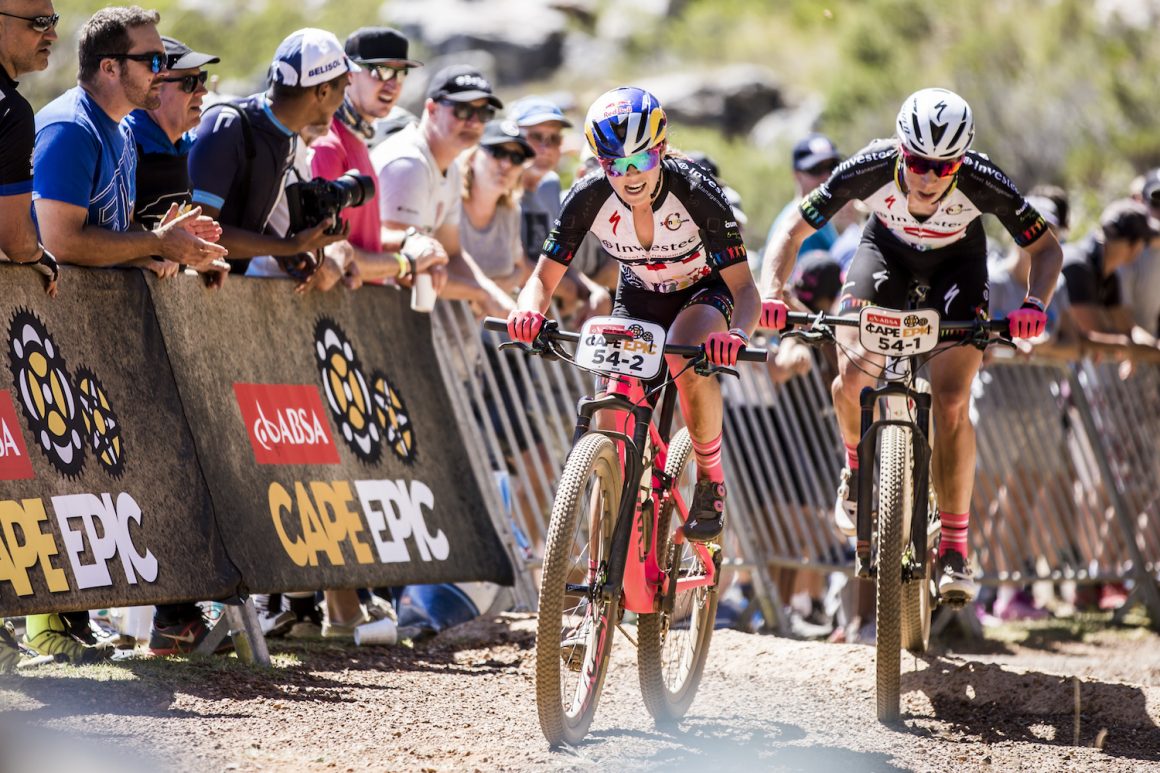 THREE-time winner Annika Langvad and her novice partner Kate Courtney combined perfectly to win the Prologue of the 2018 Absa Cape Epic at the University of Cape Town and will take a confidence-boosting 72-second lead into Monday’s Stage 1.

The vastly experienced Langvad and her young 22-year-old American partner combined perfectly despite Sunday’s Prologue being the first time they have raced together as a team.

The Investec Songo Specialized pair’s time of 53 minutes 18,5 seconds for the 20km course on the slopes of Table Mountain was 1:12,6 ahead of Langvad’s partner when she won in 2014, 2015 and 2016, Switzerland’s Ariane Lüthi, who has teamed up with Belgium’s Githa Michiels (Spur).

They were followed home by two South African / European combinations, with Robyn de Groot and German veteran Sabine Spitz (Ascendis Health/ WIAWIS Bikes) third, 2:14,2 behind the leaders and in turn just one second ahead of Mariske Strauss and her English partner Annie Last (Silverback – KMC).

The first all-South African combination was Candice Lill and Amy Beth McDougall (dormakaba) who are fifth, 3.20,8 behind Langvad and Courtney.

Langvad, who added a fourth Mountain Bike Marathon World Championship title to her name in 2017, was very happy with the new combination after a near-perfect day on the bike.

“We had a really good strategy in our mind and it played played out to perfection today,” she said after crossing the line.

“Kate and I have not ridden as a team together but I was really surprised at how well it worked. I think we had it dialled in from the first pedal stroke – it felt really good.

“The course was a bit more dry and loose from all the riders who had gone through, but I knew it was going to be that way. I was a very cautious on the loose areas and then tried to push hard on the other areas.”

Courtney was very excited with a stage win on her first ever Absa Cape Epic attempt.

“It was an incredible team effort today,” said the USA cross-country champion. “Annika is such a team player and she just made sure we played to both our strengths. Rather than put me in the hurt locker on the first day, she really pushed my pace and brought out the best of both of us.

“I think it is a really, really long race so our goal today was to dial in our team tactics and put in an effort that was strong but also within ourselves, and so to set ourselves up to race strong throughout.

“It is all new for me, so that makes it exciting, and I think gives me some advantages in terms of ignorance is bliss – I don’t know exactly how hard it is going to be and so I am just relying on Annika to be our guide and push as hard as possible.

“Talk about good mentorship? She has the experience and has spent a lot of time investing in the partnership and the teamwork to make sure we get through all eight stages and to maximise our potential.”

Lüthi was not too disappointed to have given away a minute to her former partner.

“I was really happy with second. Racing for an hour is a gear up from what I am used to and to race against the cross-country riders is really hard on a stage like this.

“My partner Githa Michiels went super hard. She is such a strong rider I am very pleased to have her on my side.

“At the Absa Cape Epic you always have to improvise and trouble shoot a little bit. There are amateur riders out there and you are always passing slightly slower teams, so it is not always smooth sailing out there on the route. You have to be super aware and awake for anything that can happen and we adapted well to anything that was in our way.

“Now we just have to take it day by day and not do any stupid things. We are probably a little bit stronger over the longer stages.

“But congrats to Specialized, Kate and Annika, they have a lot of pressure on them being the favourites and they executed it excellently today.”

By finishing fifth women’s team, Lill and McDougall are the first ever leaders in the newly introduced Absa African Women’s special jersey category. The pair only teamed up this week after both their partners were forced to pull out, but the combinations seems to have clicked quickly.

“After just one ride we can see our strengths and weaknesses and adjust our strategy for the week,” said Lill. “The Prologue was never going to be our strength so I was pretty happy.

“It would be an honour to have the Absa African Women’s special jersey, but at the same time we think that if everything goes smoothly we can still get a good result overall.”

Lill was not prepared to give a prediction of what position she was aiming for, but did say “… a podium would be really great – we are a new combination and it is a strong field.”