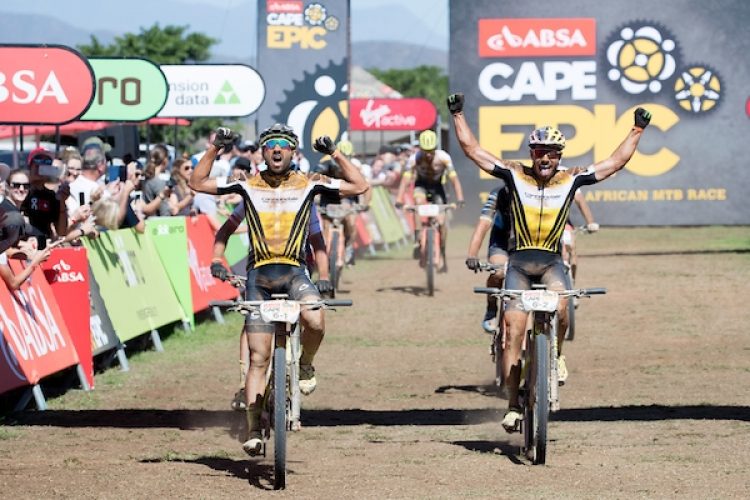 The battle between the marathon racers and cross-country specialists continued into Stage 2, on a tougher course with more climbing and even gnarlier terrain.
The pressure that comes with wearing the yellow jersey was etched onto the faces of Cannondale Factory Racing’s Manuel Fumic and Henrique Avancini ahead of Stage 2 this morning – a demanding 106km/2000m course that would yet again favour the diesel engines of the marathon racers. A new-found sense of maturity is paying off for the exuberant duo who spent most of the day conserving energy and riding smart.
Marathon incumbents and Prologue winners Nicola Rohrbach and Daniel Geismayr (Centurion Vaude) made up for yesterday’s ordinary display by riding to a calculated and powerful tempo. Their efforts were not without drama however… The pair experienced a mechanical early in the stage but the back-up team of Markus Kaufmann and Jodok Salzmann were on hand to assist with a rear-wheel change – a move that would ultimately keep them in third position on the general classification.

“I had a flat tyre after 5km and the bunch was quite big so we just kept pushing and managed to get back to them,” said Rohrbach. “It was not easy with all the dust but it was a better day for us and to get second today and win some time on Investec Songo Specialized is great.”

Geismayr echoed his partners sentiments: “Our strategy was to make up some time after yesterday. After 60km I tried to attack on a 100m climb but it all stayed together and nobody wanted to work so it came to sprint finish.”
Yesterday’s runners up, Investec Songo Specialized, made their intentions known when they attacked on the appreciably steep and loose “One-Two-Three” climb, a move only Canyon Topeak and Centurion Vaude were able to follow. They maintained their momentum on the loose descents by using their cross-country prowess to full effect and entered the 9.5km Bosvark Land Rover Technical Terrain in first position. The tight and twisty nature of this section worked in their favour but no sooner did they extend their lead than a costly puncture forced them to surrender it to a chasing pack comprising yellow jersey wearers Cannondale Factory Racing.
After putting in a serious effort to get back to the leading pack, Jaroslav Kulhavy and Howard Grotts looked poised for their first stage victory after breaking away a technical section about 15km from the finish. Kulhavy would unfortunately suffer another puncture and with it, surrender all hopes of snatching the yellow jersey away from Cannondale Factory Racing.
“Today we were let down by mechanicals,” said Grotts.” We were set for a good stage and did everything right. It was just so frustrating to be in the front and then lose time. I was riding over my limit when we chase back – now I just need to recover well.”
Further back the BULLS combination of five-time winner Karl Platt and Urs Huber were struggling to keep up with the pace – a surprise given yesterday’s valiant performance.
“Today I felt strong and good at the start,” said Platt. “But at 70km or so I just lost all my energy. I can’t explain it – this is just so disappointing.”
Daniel Geismayr (Centurion Vaude) tried to mix things up by attacking just after the Breede River crossing but Rohrbach was unable to match his partner’s effort and the bunch came together yet again. In the end it was Cannondale Factory Racing who asserted their dominance in the final 500m, communicating on an almost telepathic level which saw them outsmart Centurion Vaude and Canyon Topeak to win in a sprint finish for a second day in a row.
“Today was all about keeping safe for us,” said Fumic. “The stage suited the marathon guys more and they went for it to show us. We focussed on damage control but got caught out a few times. In the sprint our experience helped us for sure and to get the stage win and another day in yellow makes us happy. There’s still a lot of racing to come.”
Canyon Topeak’s Alban Lakata was happy to finish on the podium but expressed some of bitterness at how the final kilometres played out.
“Kristian was up to race in front today and it was brilliant,” said Lakata. “In the end the sprint finish was a little bit chaotic and I thought the Cannondale wouldn’t sprint – especially since we did a lot of work today.
“The course felt like it had less climbing but there was a lot of tricky terrain – sand, dust and slow single-track riding. I actually enjoyed the route today despite it not suiting my style of riding.
“Coming into the Absa Cape Epic I felt we could win every stage and I think we can still make up a lot of time in the next few days.”
The PYGA Euro Steel team of Matthys Beukes and Julian Jessop bagged their first win in the Absa African Men’s special jersey race with Timothy Hammond and Arno Du Toit (SPOT Africa) and HB Kruger and Stuart Marais (Ellsworth-ASG) rounding off the podium. NAD MTB’s Nico Bell and Matthew Beers – who finished 6th – were forced to surrender their red jersey to the Ellsworth-ASG pairing of Kruger and Marais.

“Today’s start was tough but we managed to work through it,” said Kruger. “We are very happy to get our hands on that red jersey – that was the one goal we had. There are still more days to come and we will defend the jersey.”