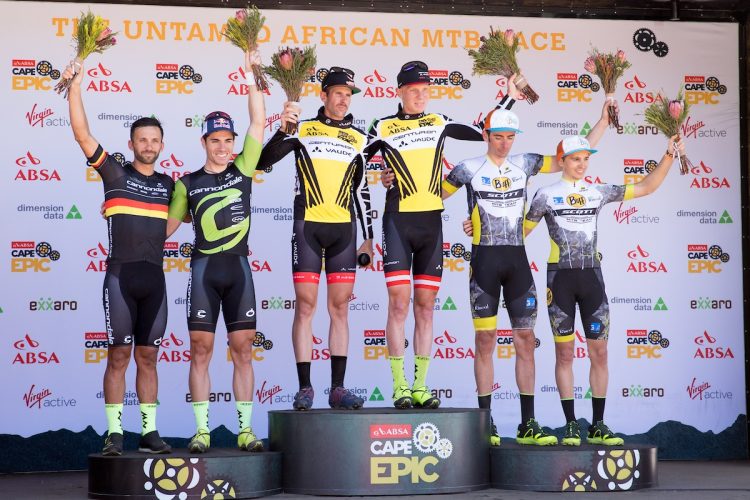 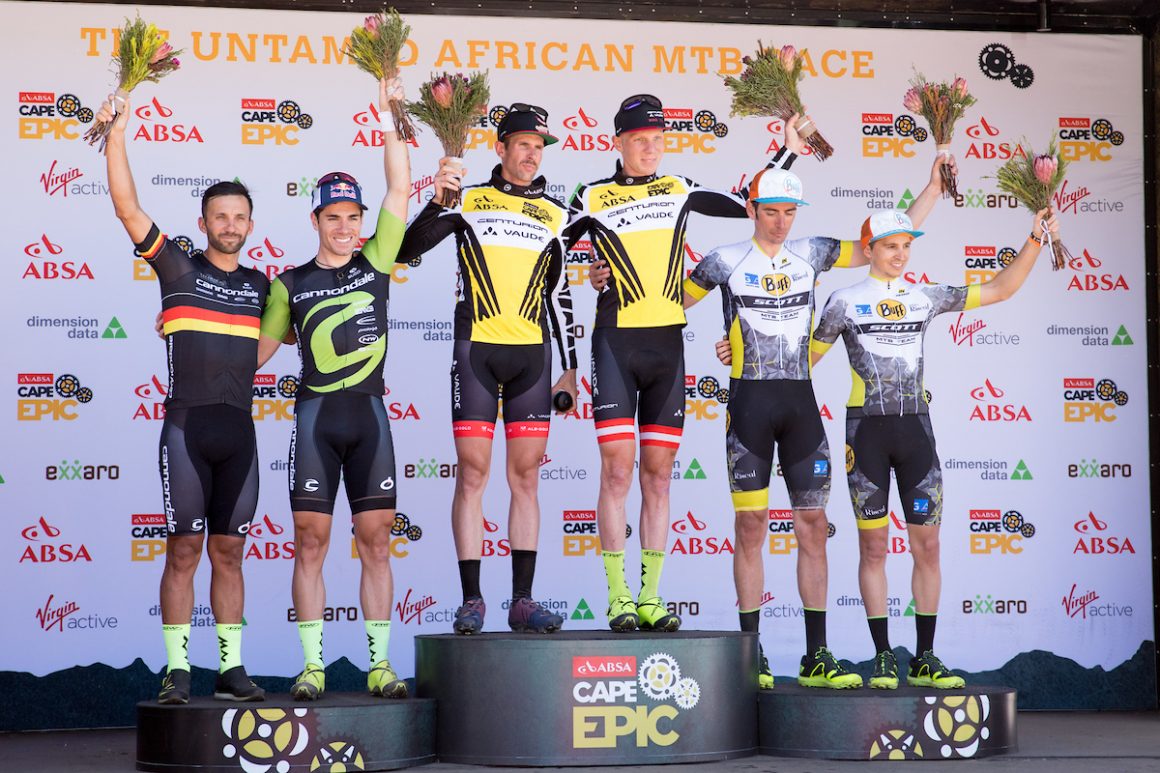 You can’t win the Absa Cape Epic on the Prologue but you can prove a point – and that’s exactly what the Centurion Vaude combination of Daniel Geismayr and Nicola Rohrbach did today by winning yellow.

Conditions couldn’t have been any better as the 2018 Absa Cape Epic Prologue kicked off on Table Mountain National Park for the first time in two years. With a somewhat technical course featuring washed-out corners and steep, tricky climbs the 20km route has been touted to favour the cross-country specialists, or at least that’s what everybody thought…

Canyon Topeak’s Alaban Lakata put it bluntly at a press conference held on Thursday in Cape Town: “Us marathon riders are going to show the cross-country guys just how to race the Absa Cape Epic.” And that’s exactly what panned out as marathon specialists Daniel Geismayr and Nicola Rohrbach powered to victory in calculated fashion ahead of Cannondale Factory Racing’s Manuel Fumic and Henrique Avancini, and darkhorse team, Buff Scott MTB’s Francesc Guerra Carretero and Luis Leao Pinto who finished third.

“It’s a great feeling to win the Prologue and I could feel leading up to the race that we had good legs – but to win is incredible and to wear the yellow jersey tomorrow is important to us,” said Geismayr. Partner Nicola Rohrbach was equally ecstatic and had the following to say: It’s unbelievable that we won today. We are feeling super strong and are looking forward to the next four days and the longer stages.”

Defending champions Nino Schurter and Matthias Stirnemann were the last team to leave the ramp and despite coming into the race as defending champions, the paring looked relaxed ahead of the start. “We are looking forward to this ultimate adventure. We showed last year what we can do, and we will try to win the race and have a fun week,” said Schurter. We don’t have any pressure this year because we showed last year that we can win it.”

The Scott-Sram duo took some time to get going but once they found a rhythm they managed to eat away at the clock, eventually finishing in fourth place in a time of 0:45.23,3. “We started well. Maybe over paced it a bit in the beginning so we struggled in the end,” said Schurter. “But the gap is not that massive and we’re not unhappy with the result.”

The Cannondale Factory Racing pairing of Manuel Fumic and Henrique Avancini finished strong – to the delight of cheering fans – using all of their expertise to scythe through the technical sections and single track, restoring a semblance of pride for the cross-country in the process. “We’re very happy with the start,” said Fumic. “We would have liked to be in yellow but we don’t mind chasing!”

The biggest shock of the day belonged to team BULLS who were unable to stamp any ascendancy during the 20km Prologue. Five-time winner Karl Platt labored on the climbs and trailed partner Urs Huber for the majority of the course. In fact, they were beaten by their teammates – the BULLS 2 contingent of Simon Stiebjahn and Tim Bohme who finished four places ahead of them in 13th position. “I just did not have enough power today,” said Platt. I was the one holding Urs (Huber) back and I struggled to get into any kind of rhythm.”

The Absa African Men’s special jersey race was shaken up before it had even begun with the news of PYGA Euro Steel’s Philip Buys having to withdraw due to illness. This unfortunate turn of events resulted in the promotion of rookie Julian Jessop to ride alongside veteran Matthys Beukes. “Julian is a fast youngster and I’m going to look after him,” said Beukes before starting the Prologue. “He is stepping up and I think he will do a good job.” Beukes and Jessop would eventually finish in sixth place in the Absa African Men’s special jersey category after Beukes punctured with 5km to go.

In the end it was the NAD MTB pairing of Nico Bell and Matthew Beers who brought it home in a time of 0:48.38,8 – securing 19th position on the general classification in the process. “The Prologue made for a hard start. Matt did not feel great earlier in the week so to finally get going was good,” said Bell. “I set the pace at the start and then Matt went to the front and upped the pace – I had to hang on from there!” The balance of the podium comprised HB Kruger and Stuart Marais of Ellsworth-ASG and Timothy Hammond and Arno Du Toit of SPOT Africa.

Tomorrow’s tough, marathon-skewed 110km/1900m course starts and finishes at Arabella Wine Estate. With just two minutes separating the top ten teams it’s going to be exceptionally hard racing conditions out there tomorrow, and one that may very well see the likes of Canyon Topeak’s Alban Lakata and Kristian Hynek come to the fore.