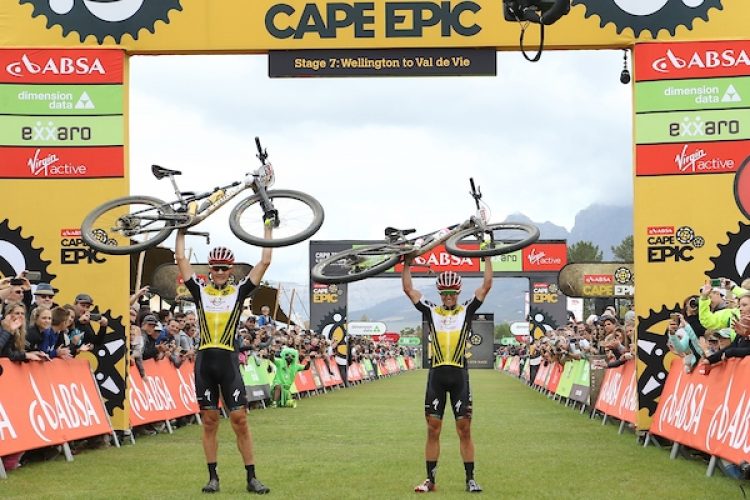 Investec Songo Specialized consolidate their long week of consistent racing to comfortably win the 2018 Absa Cape Epic.
With 69km and 2000m of vertical gain standing between riders and a finisher’s medal at Val de Vie Estate, this year’s Grand Finale was arguably the toughest in the Absa Cape Epic’s 15-year history. With four beastly climbs punctuating the course, even the sharp end of the field would feel every metre. Despite their eight minute cushion over Cannondale Factory Racing’s Manuel Fumic and Henrique Avancini, Investec Songo Specialized would have to mark every attack and pray for a mechanical-free day following a string of bad luck earlier in the race.
Cannondale Factory Racing were first to make a move, together with Centurion Vaude, but these early attacks would prove futile as both teams struggled to respond to the counter attacks launched by Trek Selle San Marco 2, Buff Scott MTB, Canyon Topeak and Investec Songo Specialized. After struggling to stay aboard the Czech Express in the earlier stages of the race, Grotts showed his pedigree – driving the pace on the climbs and controlling the lead.

“For the first few days I was struggling quite a bit but things changed in the last few days,” said Grotts. “I felt comfortable on the climbs and I’m happy with the way things have worked out for us.”

The Trek Selle San Marco 2 pairing of Fabian Rabensteiner and Michele Casagrande attacked and took the sprint on the Dimension Data Hotspot and opened up a 20 second gap in the process. Further back Cannondale Factory Racing were struggling to maintain a rhythm and risked losing their overall podium to the darkhorse Buff Scott MTB pair, who have been looking better and better as the race has progressed.
A heated exchange between Jeremiah Bishop (Canyon Topeak 2) and Manuel Fumic (Cannondale Factory Racing) would culminate in a crash after Fumic appeared to deliberately knock Bishop off his bike. Fumic however, was quick to dismiss the incident as “racing dynamics” and expressed there was no “foul play” intended.
“It was an epic battle today,” said Fumic. “We were battling for second overall with Canyon Topeak on the general classification. We had a crash and a puncture, and it was really close but we never gave up – we were always fighting. I’m happy with third place.”
The leading group would stay together for much of the stage before the Czech Express launched an attack on the Freedom Struggle climb in an attempt to splinter the group and gain an advantage heading into the final Land Rover Technical Terrain Section of the race – the “Bone Rattler”. Only Trek Selle San Marco 2 were able counter their attack, responding with a daring move of their own that would ultimately hand them a well-deserved stage win.
“Today was a good day for us,” said Rabensteiner. “We attacked to take the Dimension Data Hotspot and decided to go full gas from there. Jaro (Kulhavy) and Howie (Grotts) attacked on the last climb but we made a move on the descent and it was full-race-mode to the finish line.”
Canyon Topeak had a bit of a scare on the final descent after Kristian Hynek suffered a rear puncture. With Cannondale Factory Racing breathing down their necks just a few minutes down, Hynek was quick to fix the leak as the two managed to hold on to second place on the general classification. For Alban Lakata, it was a bitter-sweet moment as an Absa Cape Epic title continues to elude the Marathon World Champion.

“The whole Absa Cape Epic was a rollercoaster ride for us but in the end I’m happy about the second place,” said the Austrian. “It’s a pity with how things went but we will have to come again next year to try and win.”

“It was amazing that we got through the Absa Cape Epic with so few mechanicals,” said Hynek. For a moment there we were a little stressed with the puncture on the final descent but it all worked out in the end.”
For Investec Songo Specialized it was a case of minimising any unnecessary risks – particularly on the treacherous Bone Rattler descent. Their strategy paid off and despite gifting the stage to Trek Selle San Marco 2, they’d roll across the finish line at Val de Vie Estate as deserved champions after eight days of consistent riding.
“We had a pretty good ride,” said Kulhavy. “I’m very happy for Howie (Grotts) as he is a newbie and he rode really well. Maybe we will come back next year to win again. Who knows – maybe I can try and beat Suzi’s (Christoph Sauser) record of five victories. I’ve learned a lot from him and he helped us a lot this year.”
In the Absa African Men’s special jersey competition Matthys Beukes and Julian Jessop (PYGA Euro Steel) went into the final stage with a 12 minute buffer over the Ellsworth-ASG pairing of HB Kruger and Stuart Marais – a position they’d defend to the finish line.

“We had to adapt on short notice after Phil (Buys) got sick,” said Beukes. “I’m really proud of Julian (Jessop) and the winning red jersey for the fifth time. We had to fight all week and we are happy.”

While the general classification remained unchanged it was the NAD MTB duo of Matthew Beers and Nico Bell who would take Grand Finale spoils after celebrating their first win of the race just 24 hours earlier on Stage 6. They were followed home by Ellsworth-ASG and PYGA Euro Steel.
“We rode as hard as we could,” said Beers. “It’s nice to finish in the top 10 on the stage.”
Source: Absa Cape Epic