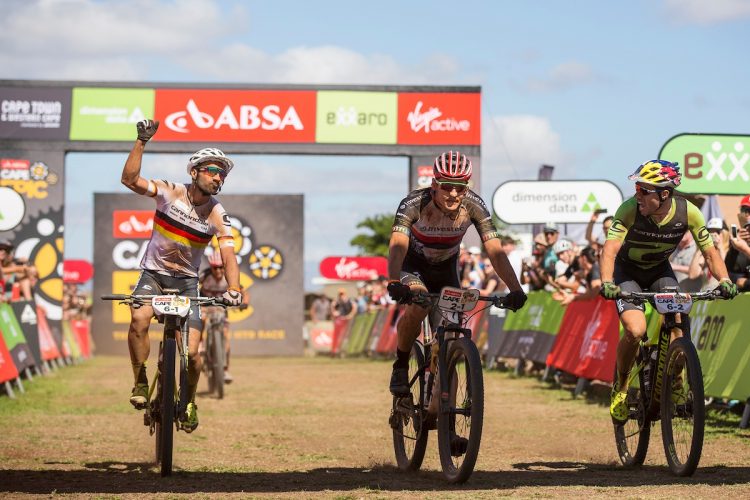 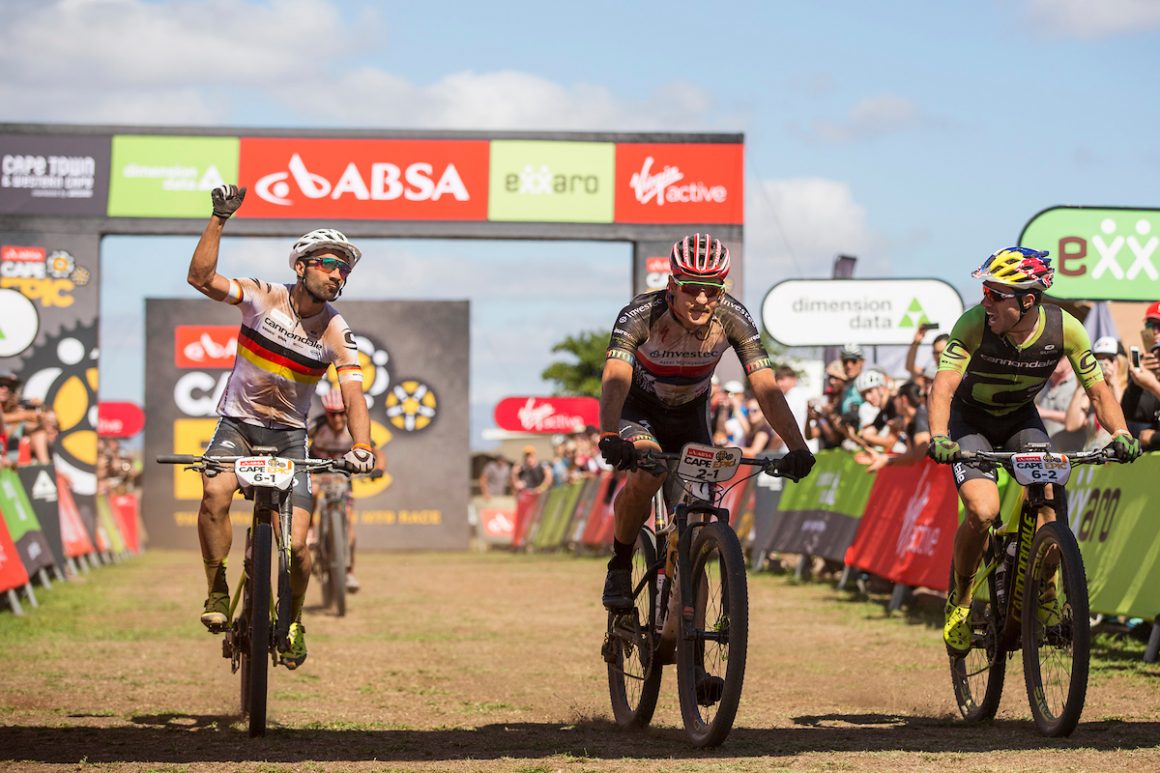 On paper, Stage 1’s 110km/1900m course looked scripted for the marathon riders but as we discovered yesterday the Untamed African MTB Race is filled with surprises – and that’s exactly how the day played out. The racing set off at a blistering pace that was described as “dangerous” and “intense” by Karl Platt who struggled in early parts of the stage.
Cross-country specialists Manuel Fumic and Henrique Avancini (Cannondale Factory Racing) entered the first water point in the lead followed closely by Alban Lakata and Kristian Hynek (Canyon Topeak) and Rohrbach and Geismayr (Centurion Vaude). Despite the efforts of the yellow jersey wearers the Cannondale boys kept the pace high and consolidated their early lead by attacking down the ‘Skid and bones’ Land Rover Technical Terrain – a dexterous move few were able to match. Investec Songo Specialized’s Jaroslav Kulhavy and Howard Grotts followed in hot pursuit and managed to join Avancini/Fumic at the head of the race.

“Today was such a good day for us. We worked well with the Investec Songo Specialized guys and never went over our limit which is good,” said Avancini.

The cross-country quartet worked together for the remainder of the race and increased their lead to nearly six minutes at one point, much to the disbelief of the chasing team of Trek Selle San Marco 2’s Fabian Rabensteiner and Michele Casagrande who would eventually secure the final step of the podium. “Today was just beautiful. This is my first Absa Cape Epic, exclaimed an animated Casagrande. “This is the first stage and we got a podium – it is like a dream for us.”

As the final 20km loomed the Czech Express assumed his characteristic position on the front of the pace line followed by Fumic, Avancini and Grotts – the latter of whom appeared to be struggling in the final moments. The stage would eventually go to Cannondale Factory Racing who outfoxed Investec Songo Specialized in a sprint finish that handed them both the overall lead and yellow zebra jersey.

“It’s always nice to win a stage,” said Fumic. “And it’s great to be in yellow after a great ride today.”

Among the day’s misfortunes were defending champions Scott-Sram who failed to establish any sense of authority after Matthias Stirnemann took ill early in the stage. Despite finishing Stirnemann will play no further part in the race. “Matthias suffered so much today. He has a stomach bug and wasn’t able to eat and keep anything down,” said Schurter. “He was completely empty and because of the infection he can’t continue the race.”
Yesterday’s leaders, Daniel Geismayr and Nicol Rohrbach of Centurion Vaude, also battled with the early pace but remain positive despite losing their overnight lead. “It was not a good day for us. We lost contact with the front riders and just couldn’t get back,” said Geismayr. “It’s sad that we could not defend our yellow jersey but we usually get stronger with each stage so I’m looking forward to that.”
After a forgettable Prologue, team BULLS put on a sterling display of grit, experience and determination to restore a glimmer of pride with a fifth place finish. “I was so disappointed yesterday but you can never lose faith,” said Platt. This morning I struggled again and Urs (Huber) thought it was all over for this year’s Absa Cape Epic but suddenly I found my legs.”

“I thought Karl was done because he looked so bad. I thought tomorrow I would have to start as an Outcast/Leopard,” chirped Huber.

As it stands Cannondale Factory Racing lead Investec Songo Specialized on the general classification by 40.9 seconds. Centurion Vaude are third, 5.36,3 back and less than a minute ahead of Alban Lakata and Kristian Hynek of Canyon Topeak in fourth.

“This is my first Absa Cape Epic, so to have been the first African team on the first real stage is a big occasion,” said Marais. “The conditions were really rough out there but my partner, HB Kruger, was riding incredibly well.”

Beukes and Jessop (PYGA Euro Steel) came home in third, a result that sees them leapfrog Timothy Hammond and Arno Du Toit (SPOT Africa) to the same position on the general classification.