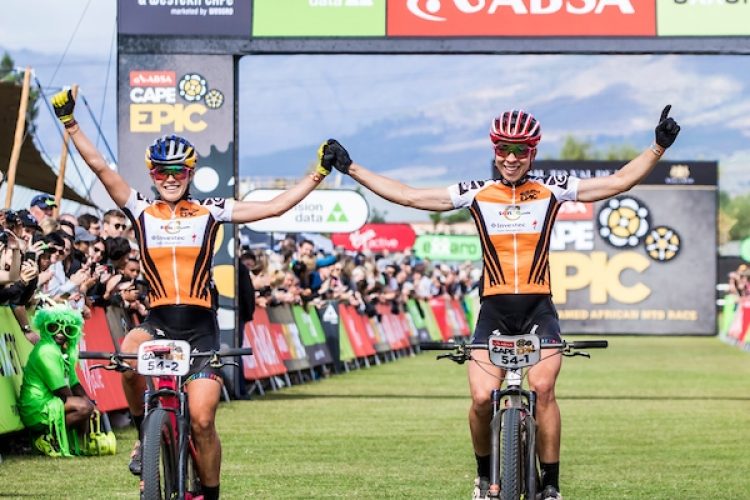 Much has been made of the Kulhavy Express hauling the Investec Songo Specialized men to victory at the Absa Cape Epic, but their corresponding women’s team has also been on rails from day one, with the Annika Express leading them to a massive overall win at Val de Vie Estate.
Annika Langvad, now a four-time winner from just four attempts at the gruelling event, and young American novice Kate Courtney were sublime this week as they crushed all opposition with an almost faultless display of stage racing.
Their perfect party was gate-crashed on the final day by the PMRA/CST Racing team of Margot Moschetti and Raiza Goulao, who spoiled the clean-sweep by winning the 67km stage from Wellington to Val de Vie Estate in Paarl on Sunday. The French/Brazilian pair was followed home on the stage by South Africans Candice Lill and Amy Beth McDougall (dormakaba), who also wrapped up the Absa African Women’s special jersey and ended fourth overall.
Sabine Spitz and Robyn De Groot (Ascendis Health) claimed third on the stage, just ahead of the race winners, which secured their runner up spot on the overall standing. Annie Last and Mariske Strauss (Silverback-KMC) limped to the finish in fifth position to secure the final step on the overall podium.
The final stage results was relatively meaningless to the overall result as Langvad and Courtney had opened up a massive 46-minute lead during the previous seven days of racing and the only thing that was going to derail their charge to victory was a bad crash or serious mechanical. They remained on track throughout the final 67km to the finish line to claim the well-deserved victory.

“This is all a little bit unbelievable and a lot more than I could have asked for. Coming here and doing so well with the Epic World Cup win and the Absa Cape Epic is unbelievable. It has been amazing to race with Kate and I have enjoyed it a lot.”
Courtney was also a surprised at how well the eight days of racing had progressed.
“It is definitely a bit of an emotional finish for me. When I set out to do the Absa Cape Epic, my first marathon and stage race, people thought I was a little crazy but my inner circle supported me and helped me get here.
“And Specialized gave me the opportunity to race with one of my heroes in the sport and I could not have asked for a better experience. And I think I have proved to myself that I can do it.
“It has been an incredible week of teamwork and so I do not think there is much more that we can ask for.”
In the race for the second spot on the overall podium, Mariske Strauss and Annie Last were able to complete the stage, something that was doubtful the previous day when Strauss was rushed straight from the finish line to the medical tent.
“We were able to get to the finish today and Mariske is much better than yesterday, but there was no gas,” said Last. “We could not race hard today.”
That meant a relatively easy path to the runner up spot for Spitz and De Groot.
“Today was pretty tough. Last night I started to get a cold, so that was a bit of a handicap today. We then decided just to keep second on GC and get to Val de Vie Estate safely,” said an exhausted Spitz.
“After the Hotspot we caught Annika and Kate again but I felt very bad and so I could not go for it after that.
“In the end you have to compare our second position overall to how it was at the beginning of the week when I was not feeling very good. To get to second overall was good and so we are happy with how it turned out in the end.”
Goulao was a bit surprised to have claimed the final stage victory and rates it as a highlight of her career.
“It was not expected that we would win today,” said the Brazilian. “We were just fighting for the top three again, but at about kilometre 15 we saw the top riders were looking a bit tired we decided today was our day. For the last 30 kilometres it was full gas and no looking back.
“I have never had this feeling of winning a race like this. The Absa Cape Epic is the hugest goal for me and I am leaving here with a new highlight.”
Source: Absa Cape Epic