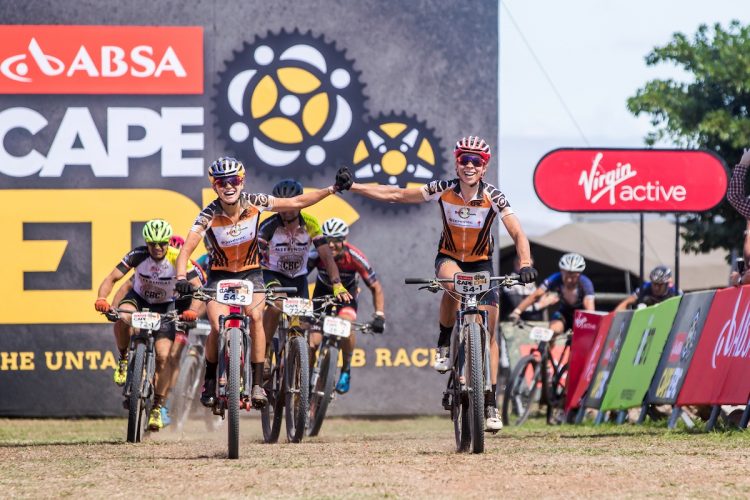 Multiple World Champion Annika Langvad and her young American partner Kate Courtney overcame a puncture to surge to a second successive victory in the Women’s category on Stage 1 of the Absa Cape Epic on Monday.
The Investec Songo Specialized duo attacked early on the 110km stage which started and finished in Robertson. Despite a slow leak in Courtney’s back tyre, which at one point looked to have put their second victory in a row in danger, they were able to add to their lead from Sunday’s Prologue.
The pair finished the stage with a time of 4:45.22, while Langvad’s former partner, Ariane Lüthi, and Githa Michiels were second for the second day in a row. After losing another 52 seconds on Monday, the Team Spur combination is now two minutes and four seconds off the pace.
The young Silverback-KMC team of Mariske Strauss and Annie Last enjoyed a strong final 30 kilometres of the stage to claim third for the day and third overall. The team Ascendis Health/WIAWIS Bikes duo of Robyn de Groot and Sabine Spitz, who is suffering with a stomach bug, have slipped back to fourth.
Langvad explained the mini drama which nearly derailed their stage:
“Kate could feel that her rear wheel was leaking. We kept on riding for a bit but then she said: ‘No, we need to plug it.’ When we plugged it the second team caught us and they got a gap. We chased and got back to them and then on a climb we attacked and were able to keep it to the end.”
Courtney was full of praise for the calm demeanour of her experienced partner when they had to stop and fix the leak.
“They say anything can happen in this race and we definitely had that experience today,” said the American after crossing the line. “Luckily we were able to fix the puncture quickly, but I learned a lot from the master (indicating Annika) about staying calm and just working together as a team and maximising our strengths.
“Annika obviously has a lot of experience, but this is my first Absa Cape Epic and one of the first times I have been out there so long and responsible for my own equipment. She is teaching me a lot.”
Langvad, a four-time World Marathon Champion as well as a former Cross-Country World Champion, said the first long stage of the 2018 Absa Cape Epic was “hard” and “long” and that sentiment was shared by Lüthi.
“It was certainly a tough day out there today, but really beautiful riding,” said the rider who partnered Langvad to three wins in 2014, 2015 and 2016. “In the beginning Annika attacked really early up the first climb and Githa and I managed to stay with them quite well.
“Then Githa had a stick or something in her spokes and dropped a bit back, so I also had to let go and see if Githa was okay. She sorted it out and chased back really hard and caught me.
“From there we could always see Annika and Kate ahead of us but we never quite managed to close the gap until they had their puncture. We then thought maybe we can take the stage if they take long enough to fix it, but they rode really, really strong and got back quickly – and still had enough to take the stage.”
Despite finishing runners up for two days in a row, Lüthi is still confident they can challenge.
“We just always have to be there and do our job. It is a long, long race and anything can happen. We must keep the pressure on them and just stay in the hunt.”
Strauss and Last are now eight minutes behind the leaders, but have a healthy five-minute cushion over De Groot and Spitz, the same team they edged into third position in 2017.
“Yah, it was a tough day,” said Strauss. “We felt it a bit toward the end but Annie was super strong and we worked well together. It was a little cat-and-mouse game we were having out there with Robyn (de Groot) and Sabine (Spitz).
“This is the second year Annie and I are racing together and we just look at each other now and we know what the game plan is.
“We figured if we could get a gap on (Robyn and Sabine) on the last big descent at about 72 kays then we might be able to pull a gap on them to the finish and that worked really well. We are just happy to be on the podium.”
Stage 1 saw the end of any hope for defending champion Esther Süss when her Meerendal CBC partner Angelika Tazreiter was knocked off her bike by a rider from another batch who caught them. The crash injured Tazreiter ‘s shoulder and she was forced to withdraw early on in the stage, while Süss will continue wearing the newly renamed Leopard jersey for solo riders.
It has been a frustrating Absa Cape Epic for Süss with the drama starting even before the Prologue. Tazreiter was called up to partner Süss after her partner from their 2017 victory, Jennie Stenerhag, injured her knee in a fall a couple of weeks before the race.
The dormakaba team of Candice Lill and Amy Beth McDougall are lying fifth overall with a big lead in the inaugural Absa African Women’s special jersey category. Currently lying second, about 36-minutes behind in that category are Western Girls’ Nadia Visser and Katie Lennard, while Nolands Spar Ladies team of 14-time finisher Hannele Steyn and Jeannie Dreyer are third.