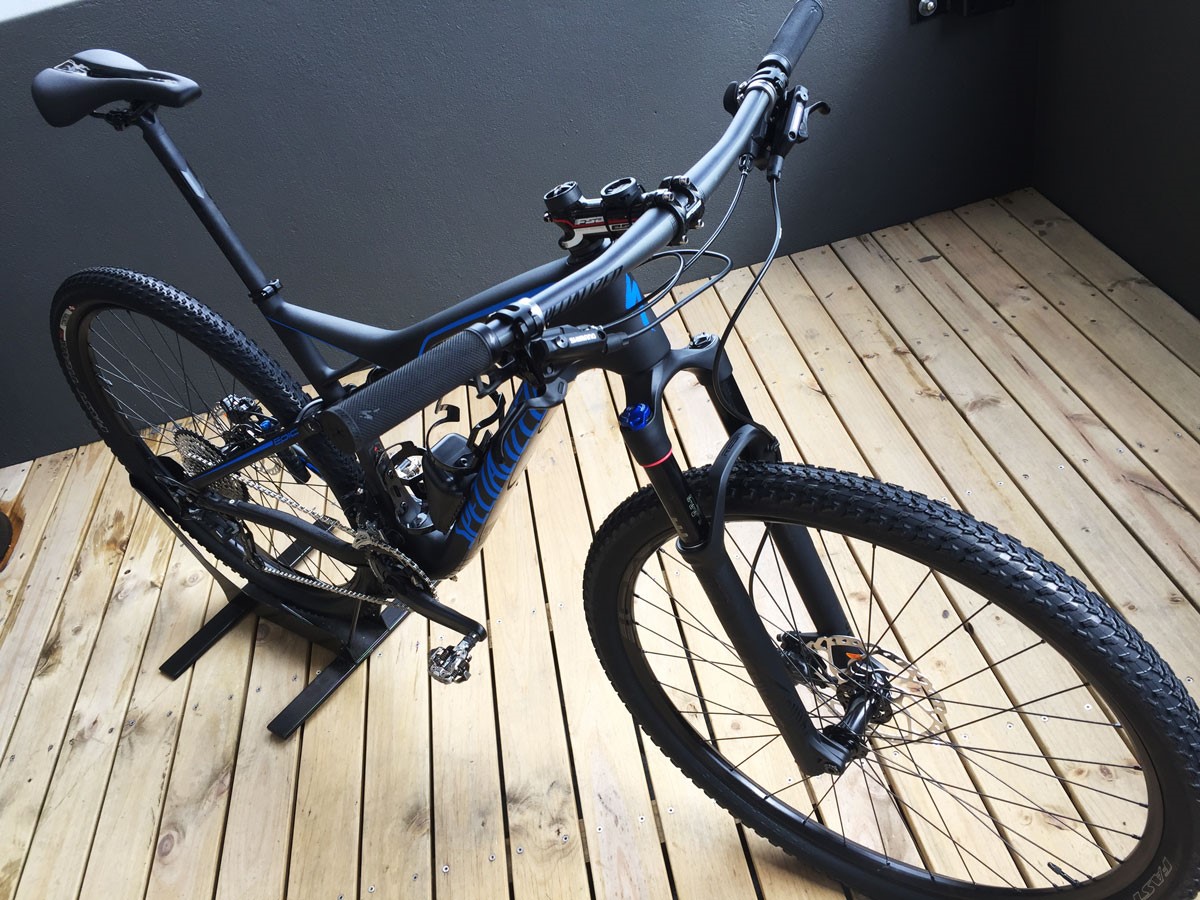 In this article Alan Williams takes the 2017 Specialized Epic Comp Carbon out for a spin!

Specialized have recently released their new models for 2017. While some of their frames received the revamp treatment for 2017, the Epic frame remains the same for 2017. We have had this incarnation of the Epic frame since it’s release in 2014, so it’s getting on in years, but it’s still relevant and still winning races. I do, however, suspect that the Epic will get a revamp for 2018.

Anyway, we’ll cross that bridge when we get there. For now, though, we’ve got this one. So let’s get the formalities out of the way. The front triangle on this model is made using Specialized’s FACT 9m carbon, which is the “entry- level” of their carbon technology. Make no mistake though, just because it’s not the top- end, does not mean it sucks. It is still very competitive with some of the higher- end offerings from the likes of Giant or Merida etc. The rear triangle is made using Specialized’s M5 alloy, the lightest alloy they produce.

The Epic still features the ability to fit the Specialized SWAT box and two bottle cages. While this is not extremely good looking, it is still a brilliant way to solve a problem no one ever had. But let’s face it, only fun- riders use saddle bags, so I’m all for it.

The bike comes equipped with the Fox Mini- Brain at the rear, which really makes for a whole lotta fast. For those that are not familiar with the Brain system, it essentially does the locking and unlocking all by itself. This is done by adding an inertia valve close to the rear wheel, which makes the system able to differentiate between a trail obstacle and rider input. In short, this means that the rear shock is firm for pedalling, but unlocks itself when you hit a bump.

And it works brilliantly. No matter how hard I tried, I could not get this thing to bob while climbing. Despite that though, it still delivers great comfort (for a race bike) and the suspension still activates and works perfectly when things get hairy.

This is great for XC racing, where you’ll be climbing a lot and then tackling some serious terrain on descents. The front fork on the Comp Carbon model is the tried and trusted Rock Shox Reba. The fork performed as expected and is a great piece of kit and matches the bike perfectly. Not too fancy, but fancy enough to ruffle your feathers.

One upgrade the bike has for 2017 is the move to 2x 11 Shimano components. This is a great feature. Perfect for marathon racing, as you are now able to fit bigger chain rings for higher top- end speed, without sacrificing any granny gearing. On that note, it would’ve been nice if they had actually spec’d the bike with bigger chain rings, as opposed to the 26-38 combo they have as standard. Aside from that, the new XT/ SLX combo performed seamlessly.

One little niggle I have with this bike is that it comes as standard with a Race Face crank. Now, my problem is not at all with the quality and performance of Race Face components, but rather with the fact that it is a relatively small brand in South Africa, which could mean that finding BB’s and chain rings to fit this crank will be a bit of a mission.

We have been reassured that the local agents are addressing this issue, but only time will tell.

There is also a World Cup version available of this bike, fitted with Sram GX 1×11 components, which is aimed more at XC racers. It also features 5mm less travel and shorter chain stays.

The bike is fitted as standard with a set of Roval Control alloy wheels, with Roval hubs and Specialized Fast track Control tires. The Fast Track tires work very well, but I would prefer something beefier up front like perhaps their Ground Control offering. The wheels were faultless. The acceleration was snappy, the were stiff under cornering loads and not too heavy up the climbs.

All- in- all, the 2017 version of this bike is perfect for the everyday rider. It’s full of bomb- proof, well priced components that are easy and relatively cheap to maintain, whilst still giving you the benefits of the higher- end tech (albeit at a weight penalty).