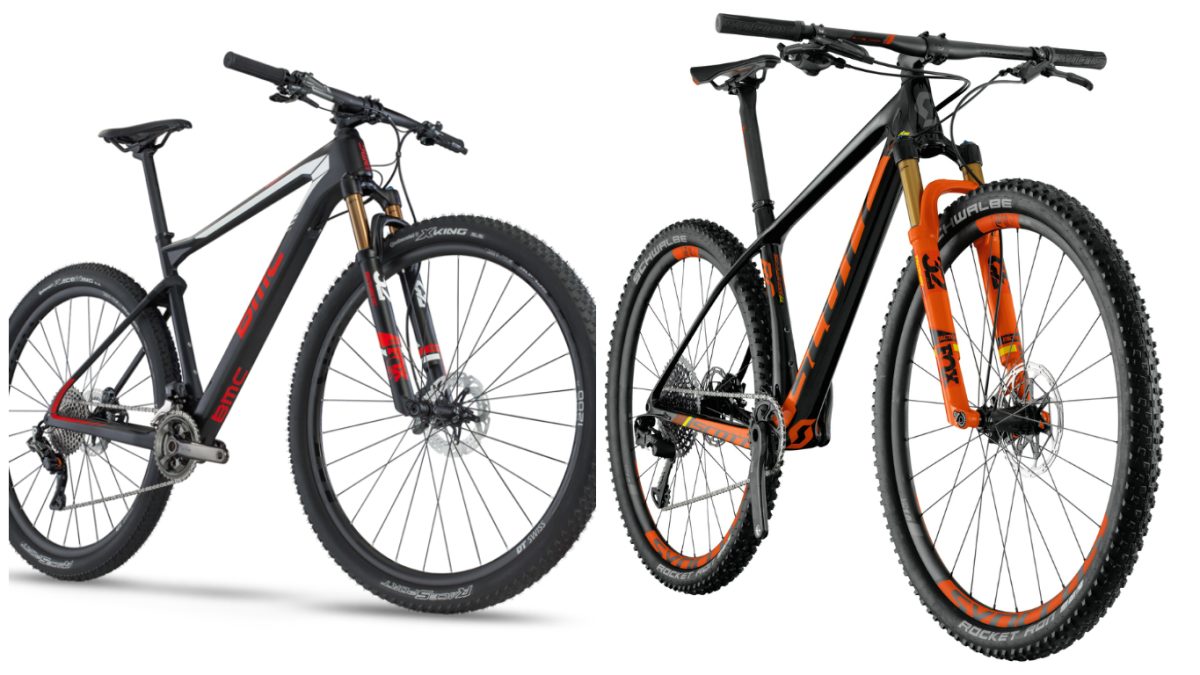 A Swiss duel is about to go down; BMC against Scott, Team-Elite rivals the Scale,    Julien Absalon vs Nino Schurter!

You see pro xc riders Nino Schurter and Julien Absalon at each other’s throats in world cup races. This of course draws a lot of attention to the bikes that help them perform so well. In particular, the hardtails they use. This led us to write our next Tech Wars article. So let’s jump in!

01 Premium carbon fibre is BMC’s highest grade carbon – engineered to perform better than best! To beat the Scale RC though, you’re going to need something better than just carbon fibre. Which is why you see BMC’s unique Micro Travel Technology coming to the playing field on the Team-Elite series. MTT is basically a mini “shock absorber” on the top part of the seat-stay. It’s a combination of having the chain-stay flexible enough to be able to push into the seat-stay mounted, integrated, XCell damper. This ultimately provides cushioning, without compromising on pedal efficiency.

Now if that’s not enough, BMC took it a step further in adding their Tuned Compliance Concept technology, on certain areas of the carbon frame. The frame can now flex in areas like the seat-stay, top-tube and chain-stay.

Then, the innovation that every rider wants to hear; Future Proof! BMC’s Dual Transmission Integration does your cable routing for you; no matter what drivetrain you run, you’ll always be able to fit it to the Team-Elite!

In our opinion, a xc hardtail should be able to flex nicely and be nice and light in the process. Exactly what BMC’s Team-Elite 01 has shown us.

The 2017 Scale hasn’t undergone major changes, instead it was updated in the detailed areas. The HMX carbon fibre has been made even stronger and stiffer, using a new layup of carbon called MR70. Basically the HMX carbon gets an extended refinement in the production process. Scott also revised their axle design and it now comes out stronger and with an integrated tool for unscrewing the axle. Then Scott also integrated the new Spark chain guide; designed so simple to keep doing its simple job!

Back to developing their carbon fibre; Scott used FEA software to create virtual prototypes, where they could test the different forces exerted on the frame, and add carbon layers where needed. This testing is inevitably more accurate, and helps to fine tune in detail. This software lead Scott to develop what they call MY17 design with EvoLap technology.

Last but not least, their dropout innovation, sees the dropout being moulded onto the chain stay as one complete piece. Unlike the bulky two-piece design of last year’s model.

Since these bikes are the lightest in the world, they’ve got to have light weight components. So it’s not a surprise that both bikes feature FOX’s New 32 Float Step Cast.

When it came to gears, BMC went with the neat and elegant Shimano Di2 system. This inevitably performs better than the Sram XX1 drivetrain equipped to the Scale RC. However, we do suspect that Di2 is slightly heavier than XX1, hence Scott choosing the XX1.

The rims of both bikes are each carbon fibre, as you’d expect. On the Scale we have the Syncros XR1:0 and on the Team-Elite 01 we have the DT Swiss XRC 1200 wheels.

From these measurements we can see the Scale RC will probably handle better than the Team-Elite 01. It’ll also be better on technical sections. One thing we are uncertain of though is if you’d really feel difference between the seat-angles.

BMC takes it in tech, but the true test will be on the trail against the Scale RC. We’ll leave that decision for Schurter and Absalon!